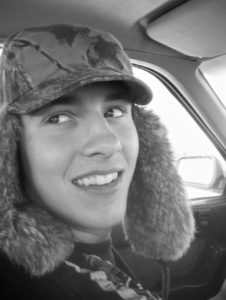 MICHAEL “MIKE” ANTHONY JONES, beloved son of Ron Jones (Sonya Keeler) of Coalhurst and Shonna Scriven of Medicine Hat, passed away peacefully at home on Tuesday, January 16th, 2018 at the age of 25 years.

Mike was born February 28, 1992, in Lethbridge, where he was raised and educated. He attended Senator Buchanan & Winston Churchill schools. He played baseball & hockey his whole life. Mike enjoyed the outdoors, especially camping and music. He had a great sense of humor and will be sadly missed by his family and friends.

Interment will follow at the Union Cemetery, Fort Macleod.

In memory of Mike, contributions may be made to Mental Health or AADAC.

One Condolence for “JONES, Michael”

Leave a Condolence for Ed and Del Grimm