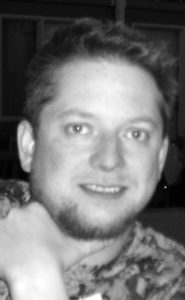 It is with great sadness that we announce the passing of our beloved Ryan Michael Ripley, who passed away on January 17th, 2018. Ryan was born in Lethbridge, Alberta on May 29, 1979. Ryan’s early years were spent in Southern Alberta, and after high school he moved to Saskatchewan. Ryan maintained a large group of friends and family in both provinces whose lives were deeply impacted by his big heart, boisterous spirit, and kind soul. Ryan resided and worked in Regina, Saskatchewan, where he devoted his time and efforts to his three children. Ryan was an excellent father, he found ways to show his kids how much he loved them every day and his face would light up when he spoke of them. Ryan enjoyed hockey and music, and has been referred to by his teammates as the best dressing room DJ around. Ryan was an avid Saskatchewan Roughriders fan and enjoyed attending and watching many games with his family and friends. His entire work life focused on helping people with their taxes, he enjoyed meeting with his clients and meeting new clients. He got great satisfaction from helping them and guiding them in challenging times. He was passionate about his family and would make a point of taking time to spend with everyone even though it meant many hours of driving. Ryan will be dearly missed by so many, the positive impact he has had on other people’s lives was truly remarkable. Ryan will be fondly remembered for his sense of humor, passion for music, and the compassion he exemplified to those around him. Ryan leaves behind his son, Hunter, daughters Vienna and Charlee; sister Cindi (Chris), and their daughter Kiera, mother Doreen (Dave), father Rob (Gail), and a large group of extended family and close friends. Ryan will rest near his hometown of Magrath, Alberta and a celebration of his life will take place in the spring. The family would like to extend their sincere thanks to Ryan’s close friends for the love and support shown to Ryan, may we all find comfort in our hearts knowing he is now at peace. In lieu of flowers, donations to a fund for his children will be graciously accepted. Please send an email to cindiripley@hotmail.com for more information.