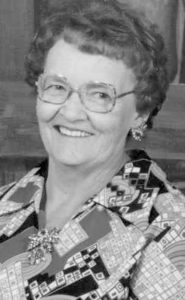 Dorothy Liberty Taylor entered life in a hurry and lived her life much the same way to the fullest. Her parents, Charles and Isabella Goode, who were then living on the homestead near Picture Butte at SE33-12-21-W4, rushed by car to Lethbridge for their child’s delivery. They didn’t make it. Instead, Dorothy was born in the coal mining hospital in Diamond City, north of Lethbridge, in the stormy evening hours of January 6, 1918. Dr. Inkrote delivered her that night. This month, 24 days after celebrating her 100th birthday, Dorothy died in Lethbridge where she has lived for the past 45 years. Her beloved husband, Henry Edwin Taylor, died in 1977. The great depression of the 1930s drove the Goode family north to the Peace River country where her father set up farming. It was here that she met Henry Taylor who was homesteading in a rural community called Rosedale. Her brothers Morris and Art also homesteaded, but Art returned to Picture Butte area where he lived for the rest of his life. Her sister, Helen, stayed in Barrons where she married William Nolan. All her brothers and sister have predeceased her. Henry and Dorothy moved to Brandon, Manitoba, in 1956. It was here that Dorothy worked as a school secretary and joined the Order of the Royal Purple Lodge. She was a member for 50 years and an Honored Royal Lady three times. Dorothy was an active community member and will be remembered for her cheerful laugh and endless energy. She loved sports and was good at them, especially bowling, curling and baseball. She was an expert needlewoman, winning many prizes at fairs and Women’s Institute competitions. She will be greatly missed by her children, Wilma and Roger (Donna), two grandchildren, Richard and Bruce (Kerry), two great-grandchildren, Riley and Ashley, and two great-great grandchildren. There will be a private family service. Donations in her memory can be sent to the Lethbridge Foundation, #50, 1202-2 Avenue S, Lethbridge T1J 0E3.