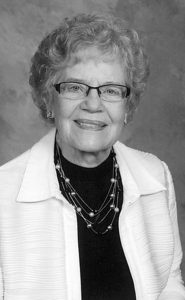 Alice was born in Coalhurst, AB. As a young girl, she lived with her family there, later moving to Lethbridge and then back to Coalhurst after marrying Tom McLaren in October 1952. While in Coalhurst, she worked at the Dominion grocery store, then the Auto-Matic Electric in Lethbridge and raised their two children Debbie and Larry.

In 1977 they moved to Camrose, owned and operated the Camrose and Slave Lake Cable Systems. Alice attended the Calvary Pentecostal Church now known as the CityLights Church. She was very passionate about her involvement in the church. Alice liked to garden and enjoyed her flowering plants. She accompanied Tom to many grandchildren’s birthdays, 4-H events and to the Kootneys on fishing trips.

She was a wonderful and loving wife, mother, grandmother, and great-grandmother. Her kind heart and generous nature will be remembered by many.