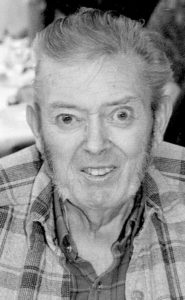 Arthur Thomas Vance of Picture Butte, beloved husband of the late Juanita Vance, passed away peacefully at Piyami Place on February 14, 2018 at the age of 83 years. Dad was born on September 1, 1934 in Windsor, Ontario to Arthur and Isabel Vance. He was the older and only brother to 4 sisters, Carol, Janet, Marge and Verna. Dad went to school in Windsor until they moved to the family farm in Richwood, Ontario in 1950. After his schooling Dad worked with his father as a cement contractor, digging wells and a number of other jobs. In 1955, he headed to Calgary to look for work and met Mom, the love of his life. They were married in March 1957 in Lethbridge and moved to Paris, Ontario the same year. Jim was born in February 1958 and Frank soon followed in December 1959. In 1960 the family moved to Taber to work for Brian Sproule, then in May of 1964 we moved to Picture Butte where Dad got a job running a feedlot for the Canadian Sugar Factory. In October of that same year, Arlene was born, and their family was complete. In 1978, he started as a night watchman for the sugar factory and worked up to equipment operator loading the sugar beets. He retired from the factory in February 1994. Dad was very community minded, he served several terms on town council, was on the volunteer fire department and was a member of the Picture Butte Elks. Dad and Mom loved to camp, and Dad especially loved to fish. Every summer we headed out to somewhere different, the Oregon coast, California, Barkersville, B.C. and many other places. Dad couldn’t have been more thrilled when the grandkids started arriving. They were taken on many of those camping trips and even went on a cross country trip to visit relatives in Ontario. In 2002, Mom passed away and knowing Dad would be lonely, she made arrangements for him to find long term companionship with her new friend Audrey Smith. Dad and Audrey travelled extensively across Canada and the United States, including Alaska. They enjoyed many years together. Mom truly knew what was best for Dad. In 2012, Dad moved across the street to Piyami Lodge, then just lately to Piyami Place. We have been told he kept the staff at Piyami entertained. He lived a happy and fulfilled life before his passing. Besides Mom, Dad was predeceased by his parents; his son Frank; sisters Carol and Marge; and step grandson Jason Gergel. He is survived by his friend Audrey Smith, his son Jim (Linda), granddaughter Danielle (Blair) Ross, their girls Molly and Maddyn, his grandson Derek (Brooke), their son Jaxten, his daughter Arlene (Ken) Steward, grandson Josh (Mackenzie), step grandson Barry (Lorelei) Gergel and their family, sisters Janet Atkinson and Verna (Rick) Fries and brothers in law Jim Cochrane and Melvin Godlonton. We would like to thank Dr. Janzen, Monique and the staff at the Heart Function Clinic, as well as Dr. Mohamed and the staff at Piyami for all their love, care and support they gave to Dad. As per Dads wishes there will not be a funeral. There will be a private family burial at a later date. Cremation entrusted to Martin Brothers Funeral Chapels.