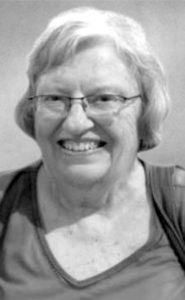 ISOBEL FLORENCE FOWLER, beloved wife of Arthur Fowler, passed away at St. Michael’s Health Centre on Friday, February 23rd, 2018 at the age of 81 years after a brief yet courageous battle with cancer. She was born January 26, 1937 to Charles and Leona Fowler in Arcola, SK during a winter snowstorm. Isobel is survived by her husband Arthur Fowler; her children Wendy Nelson (Keith Burgess), David Nelson (Susan), Gary Nelson (Marieta) and stepson Jacob Fowler (Amanda), as well as her grandchildren Tyler (Kaeley), Matthew, Jonathan (Samara), Jennifer, Christopher, Jacob, Colby and Noah, and her special great-grandchild Cassius.Isobel’s passion was her grandchildren. She enjoyed having them with her during summer vacations and spent as many holidays with them as she could. Isobel and her granddaughter Jennifer learned to quilt together and spent numerous hours doing so. They also learned how to make cards and spent time together creating cards for all occasions. She was a true horse woman. As a small child, she rode her horse Jessie to and from school, and as she grew older, won many ribbons and trophies in various showings with other horses she owned. Her children joined in showing horses and she supported their involvement with the 4-H and other horse clubs. Isobel was a very spiritual person and she made God a big part of her life. Shortly after moving to Lethbridge, she and her coffee friends regularly attended Park Meadows Baptist Church. Her coffee friends also meant a lot to her and she truly cherished the relationship they had over the past three years.A Celebration of Isobel’s life will be held at CORNERSTONE FUNERAL HOME – 2800 Mayor Magrath Drive South, Lethbridge, AB on Monday, March 5, 2018 at 2:00 P.M. with Pastor Lorne Willms officiating. In lieu of flowers, donations in Isobel’s name may be made to the Canadian Breast Cancer Society, #200 – 325 Manning Road N.E., Calgary, AB T2E 2P5.