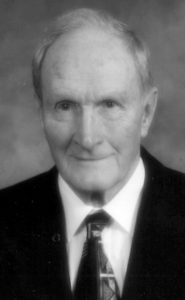 Dr. Donald “Don” Wilson of Lethbridge, passed away at St. Therese Villa on Sunday, March 4, 2018 at the age of 92 years. He will be sadly missed by his 4 children John (Lynda), David (Angela), Doug (Claire), Sharon (Lea) Brocklesby; 6 grandchildren Bronwyn, Morgan, Erik, Courtney, Sean (Heather), Chris (Alaina); 4 great-grandchildren Rachel, John, Nevah, Elyse; sister Helen (John) Hvozdanski, as well as numerous nieces, nephews and their families. Don was predeceased by his loving wife Neva. Don was born on June 12, 1925 in Rowley, Alberta and grew up in Calgary with his parents Benjamin and Marian with his family Dorothy, Bette, Greta, Lois and Helen. He served overeseas in WWII and on his return married Neva in 1948. He got his PhD in agronomy and agrology and worked at the Lethbridge Research Station first as a scientist then as head of Plant Science and then as acting director of the research station. He worked for a year in England and Ottawa. After he retired he worked with Prairie Seeds. He was often spotted at the Lethbridge Country Club where he golfed until he was 90. He served in many capacities at McKillop United Church, he volunteered with family support at St. Michael’s while Neva was there. He was also on the board of Governors at the U of L in the 1980’s. He and Neva enjoyed camping, curling, swimming, the symphony and playing bridge. Don’s family would like to extend a heartfelt thank you to Dr. Tim Collins, Gilbert Villegas, the wonderful staff at St. Therese Villa, Columbia Assisted Living and The View. A Memorial Service will be held at 1:00pm on Saturday, March 10, 2018, at McKILLOP UNITED CHURCH, 2329 – 15 Avenue South, Lethbridge, Alberta, with Reverend Trevor Potter, officiating. For those who wish, memorial donations may be made to the Alzheimer Society of Canada, 20 Eglinton Avenue West, 16 Floor, Toronto, Ontario, V4R 1K8.