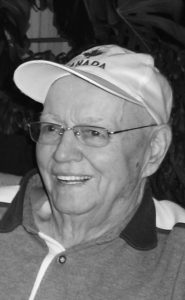 HERBERT “HERB” THIELEN, of Coutts, beloved husband of Jean Thielen, passed away peacefully at the Milk River Health Centre on Sunday, March 4, 2018 at the age of 87 years.

He was predeceased by his infant son Tommy, his parents Peter and Rose Thielen, his son-in-law Griff Bye, his brothers Edmund and Jerome, his sister Adeline Dixon, as well as father-in-law and mother-in-law John and Sally Blackmer.

Herb was born February 15, 1931 in Allerston, AB on the family farm. He began farming as a young boy with his father and continued farming with his son Bob and grandson Brent. In his heart, he never retired from farming, and his knowledge and opinion were always sought and valued right up until his last days.

While raising their family and farming together, Herb and Jean enjoyed activities such as curling, pinochle and gardening. He was a devoted and loving father and grandfather whose grandchildren were very special to him. He loved watching them grow and providing them with support. He was also an excellent – sometimes overzealous – cheerleader at various sporting events. Herb enjoyed playing sports in his younger years and spectating in his later years. He especially loved baseball and was a huge fan of the New York Yankees.

Faith was very important to Herb. He served on Parish council, was a charter member of the Knights of Columbus and helped build the Holy Angels Catholic Church in Coutts.

Herb was a caring, generous and kindhearted man who took great care of everyone around him and always put others first. As he grew older, those he cared for so much throughout the years started to take care of him, and he accepted that transition with an incredible amount of grace. He will be missed by all.

The Funeral Mass will be celebrated at ST. PETER’S CATHOLIC CHURCH, on Monday, March 12, 2018 at 11:00 A.M. with Father Benedicto Tugano IV celebrating.

A Private Family Interment will be held at the Coutts Cemetery.

Herb’s family would like to thank Dr. Pieter Krog and all of the staff at the Milk River Health Centre, as well as Dr. Aaron Low and Dr. Ernie Janzen for their excellent care.

One Condolence for “THIELEN, Herbert”