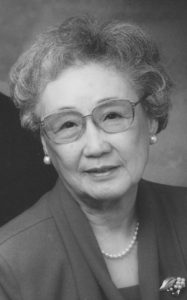 Kuniko Ryning (Iwaasa) passed away March 5, 2018 in Lethbridge, Alberta, 3 days before her 96th birthday. Kuni was born March 8,1922 in Raymond, Alberta, the fourth of nine children born to Kojun (Henry) and Ito Iwaasa. She was raised on the family farm, southeast of Raymond and attended school at the Mammoth School on the Milk River Ridge and in Raymond. After school she trained and worked as an occupational therapist at the Claresholm Auxilary Hospital for Women.

In 1964 Kuni married William Ryning and they continued to live in Claresholm until 1974. After a brief “adventure” in Kelowna, British Columbia, Kuni and Bill moved to Lethbridge in 1975. After Bill retired in 1985, they spent much of their time travelling, including spending several winters in Arizona. In 2006 Kuni and Bill moved into Martha House where they resided until Bill’s passing in September, 2011. Kuni continued to live there until she was moved into Park Meadows Good Samaritan Facility.

Kuniko was kind, caring and generous. She will be missed by all of us who knew and loved her. The family wishes to thank all the staff at Park Meadows Good Samaritan Cottage No. 5, for the good care and thoughtfulness. It truly made a difference.

Koden is gratefully declined, please make a donation to a charity of your choice.