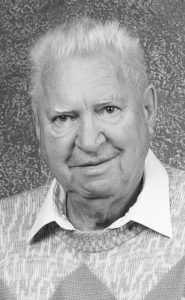 EDWARD J. SMITH, beloved father of Cheryl Smith and Linda (James) Baron and grandfather to Kaitlyn, Charlize and Aimee Baron, passed away quietly in his sleep at the Chinook Regional Hospital on Wednesday, March 14, 2018 at the age of 91 years.

He is survived by the above and numerous nieces and nephews.

He now joins his loving wife Dena, their parents and all his siblings in the afterlife. His sister in law Fran Andrews still resides in long term care in Lethbridge.

Dena and Ed, Fran and Del Andrews and Bonnie and George Sinclair spent many happy hours waterskiing, camping and boating. Ironically, after a lifetime of knowing each other, Dad and Del passed on the very same day.

Ed was born in Coaldale and was the youngest of six children. As a teenager, he attended a Catholic school in Pincher Creek. He continued his studies at SAIT technical school where he became a machinist. During his technical training, he made many friends and enjoyed running around Calgary.

For those of you who discovered watermelons missing from your Coaldale garden 75 or 80 years ago, Ed freely admitted to “borrowing” one every now and then.

He later joined his brother and father as a John Deere dealer, branched out to selling boats and then began Smith’s Color TV with his father in Coaldale. The business expanded and they opened a store in Lethbridge. Although Dad retired many years ago, his legacy, Smiths Custom Audio Video, is still found on 13th Street North today. Many people in this area bought their first TV’s and appliances from him.

Ed and Dena spent ten years courting and during this time they were badminton champs and water skiing enthusiasts, stirring up a wake in the local irrigation canals with the tow rope tied to the window pillar of whatever new car Ed owned, tearing up & down the dirt tracks alongside the canals. Buyers of his used cars could never figure out why they were always sprung a little bit.

Ed and Dena married on May 6th, 1961. They were blessed with two children, Cheryl and Linda, who have many happy memories of family trips and time spent with family and friends at the cabin.

Ed’s grandchildren were the highlight of his life. There were many enjoyable hours watching them grow, learn to swim, water ski, ride dirt bikes, play marbles and card games (Smear, anyone?). Campfires and twisties stuffed with raspberry jam were always highlights of the summer. As the girls got older he was their biggest sports fan. Ed rarely missed one of their volleyball, basketball or soccer games. He was proud when Kaitlyn graduated and went off to engineering school. Ed tried to hold on for Charlize’s graduation this spring but lost his battle with pneumonia. He was so proud of her basketball accomplishments. He will be with Aimee in spirit as she moves to high school this year and goes on with her sporting efforts.

Ed liked to build and fix things and came up with creative solutions. He liked woodworking and enjoyed snowmobiling and motorcycling. The cabin at Ashley Lake was his favourite place and many happy memories were created there. Many friends and family enjoyed this special place with him. The cabin will not be the same without him, but his memory and stories will live on.

Ed was a wonderful character and a caring and loving person. He loved to drop by unannounced for friendly visits with his old friends. We’re all going to miss him.

A memorial for friends and family will be announced in the future.