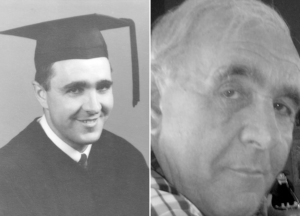 ALLEN STEWART TOLY passed away March 16, 2018 in Lethbridge, Alberta at the Chinook Regional Hospital at the age of 81 years old due to complications from Alzheimers. Born October 14, 1936, he was the oldest of five siblings born to Steve and Gay Toly. He leaves behind his three children, Lance (Shelly), Lisa, and Dana Watson (Neil), seven grandchildren (Ali, Paige, Jaxson, Noah, Kelton, Laken and Dayton) and two great grandchildren (Hixon and August). He was predeceased by his brother Wayne and is survived by his three sisters Pat Smith (Ron), Sona, and Linda Kofman (Rudy). Dad was passionate about education and received degrees from Olds College, Montana State University (BSc.), and UC Davis California (MSc.). He raised his family primarily in Claresholm where he was employed as a District Agriculturist for 26 years. He owned a small dryland farm outside of town which was his pride and joy and was a source of fulfillment to him. Many life lessons were taught on that farm. Dad grew up in Coaldale and learned the value of hard work in the sugar beet fields on his family farm. One of our lasting memories of “Grandpa Pops” is teaching his children and grandchildren the value of obtaining a higher education. He was insistent that this was the gateway to a better and a more productive life. And we believed him. After his retirement, he sold the farm and settled in Lethbridge where he delighted in his grandchildren’s various school, athletic, and extracurricular accomplishments. He loved to watch and cheer them on throughout the years. He was a strong and proud man, but his heart was softened by his grandchildren’s love and respect for them. In his retirement years he enjoyed watching movies, keeping his truck clean, oil painting, wood carving, and enjoyed travelling to different parts of the world. The family would like to thank the staff of St. Mikes, Dr. Lee, Dr. Ikuta, and countless other health care staff that helped care for him in his declining years. There will be no formal service. Family will gather together for a private celebration of his life at a later time.

One Condolence for “Toly, Allen Stewart”