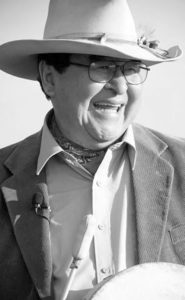 It is with a heavy heart and sorrow, that we announce the sudden passing of LOUIS MELVIN SOOP – Piitaikihsipimii (Spotted Eagle). A beloved husband, father, brother, uncle, grandpa, and friend, dearly departed at his home on March 16th, 2018 on the Blood Reserve.

Due to complications at birth, Josephine was kept at the hospital for a month, and Louis was taken care of by nuns who came to adore him, and would often walk the halls with him.

Louis, a known scholar, attended The Residential School, during which he joined the cadets, and quickly rose in ranking, receiving a medal for outstanding marksmanship. Soon after, Louis was awarded a commission from the Governor General in her Majesty’s Service to the rank of Second Leftennant; also attended Glenwood School, travelling on horseback to and from proved to be joyous for Louis, then Cardston High School, and finished his final year at Western Canada High School in Calgary, AB, working at Loblaws after school to pay for room and board. Throughout his school years, Louis started a band with Harold Healy, called the Melody Pals, where Louis played the accordion. They would often crash dances where the music tempo would be slower, and liven up the crowds with their cheerful music.

Once finished school, Louis decided to move to Toronto, finding work at Sears, where he would soon meet the love of his life and future wife Abby. They were married within a year, and traveled to Glendale, California, where Louis received training working on the new IBM computers. Once training was complete, heading back to Toronto, Louis started working at the Canadian IBM.

After 2 years in Toronto, Louis received the greatest opportunity, working as a reporter at the Blackfoot Radio Station. Moving back to the Blood Reserve, Louis found his calling and by far his favorite profession. Louis was very sincere and engaging with people, proving a favourite past time, and not considered a job by any means as this summed up his whole personality.

Louis’ wide range of employment also included managing the Standoff Supermarket, then returning to the Kanai News as Director of the paper. Louis was always quick to help loved ones, most notably driving the late Everett Soop to conferences, workshops, and meetings, all whilst sitting on the Alberta Heritage board and the Alberta Handicapped association for several years.

The ever adapting scholar, continued his education by studying his love of art at The University of Lethbridge. Aquiring a degree in Fine Arts, and developing his own unique style, his works are displayed throughout the reserve, and is featured in The Edmonton Parliament Building. Louis also coordinated The Art Symposium at The Galt Museum in Lethbridge, AB, and acted as Director at The Native Film Festival in Pincher Creek in September of 1988. In 2002, Louis was instrumental in bringing The Freeman Collection of Native Artifacts from The Royal London Museum and The Royal Ontario Museum to be exhibited at The Galt Museum entitled Akaitapiiwa Ancestors Exhibition.

Louis’ love of heritage was showcased as he started teaching Blackfoot Studies at The Red Crow Community College for over 20 years, and partaking in seasonal teachings for over 10 years at The University of Lethbridge and University of Calgary.

Louis started storytelling with Mary Hayes, travelling Alberta partaking in conferences and school symposiums, becoming very in sync. Traditional Dancing brought tremendous joy to Louis, where he would dance at The Chateau Isabella on the weekends, and was invited to dance in Hamburg, Germany, where there are Native Outdoor showcases.

In the early 2000s, Louis and Abbey joined one of the Reserves most prestigious associations, The Horns Society.

In the last few years of Louis’ life, he started writing his memoirs of life experiences, and the night before his passing, Louis looked over at his wife Abbey Soop, and stated “I think I’m finished.” He touched so many lives, and was truly loved by all, and will be greatly missed. His memoirs will be published in the near future.

A Wake Service is CHANGED to the Moses Lake Community Hall, Blood Reserve on Friday, March 23rd from 7:00 p.m. all night. The Funeral Service will be at St. Paul’s Anglican Church, Blood Reserve on Saturday, March 24th at 11:00 a.m.. Condolences may be sent to: www.legacyfuneralhome.ca