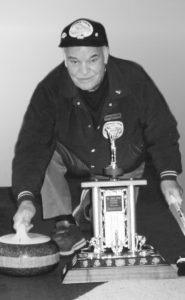 GEORGE PERVERZIFF, beloved husband of the late Blanche Perverziff, passed away at the Chinook Regional Hospital on Sunday, April 1, 2018 at the age of 98 years.

George leaves to mourn his devoted daughter, Bonnie (Tom) Scott, his grandchildren Jeremy and Brian (Charissa) Perverziff and his two great-grandchildren Duncan and Kaylie Perverziff, all of Lethbridge. He is also survived by his sister Billie (Sonny) Slavich as well as numerous nieces and nephews.

He was predeceased by his parents George and Lucy, his son Dennis, his sisters Helen (Ken) Bluher and Marie Huber and his brothers Peter (Sylvia) Perverziff and John Perverziff.

George was born in Skiff, AB on March 21, 1920. In the late 1930s, he moved to Lethbridge and married Blanche in 1944. He worked as a vulcanizer at Kirk’s Tire. Later on, he became a truck driver and hauled lumber. He and Mom formed their own trucking company years later, and Dad transported poultry for Lilydale.

Fishing was Dad’s passion. His most memorable fishing expedition was with his son, Dennis, in the Northwest Territories. Often, Dad and Mom would hook up the boat and head down to Duck Lake for many enjoyable outings. Upon retiring, Dad tried his hand at curling and absolutely loved it.

When Mom became ill, they moved to the West Highlands Centre. Mom passed shortly after. A very special thank-you to all of the staff at West Highlands for their kindness, dedication and genuine concern for Dad; he was treated with respect and dignity and was truly content living there. Additionally, thanks to the doctors and nurses on 4C at the Chinook Regional Hospital who have been so compassionate and supportive through this difficult time.

Dad always put family first. He taught us that hard work and determination were qualities that would give us strength in times of adversity. He maintained a positive attitude and will be dearly missed.

One Condolence for “PERVERZIFF, George”