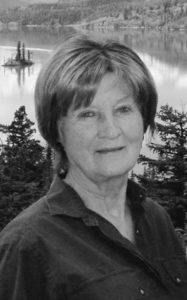 Mrs. Barbara Marlyn Carpenter of Mountain View, beloved wife of Mr. Darrel Carpenter, passed away peacefully at the Chinook Regional Hospital at the age of 84 years. She suffered a stroke on Monday morning, April 2, 2018 and went to be with her Lord on Wednesday, April 4, 2018.

Barbara was raised on a cattle ranch near Wolf Point, Montana. She earned a nursing degree in her early 20s and married Darrel at 22. They lived in France, Missouri, North Dakota, California, British Columbia and Northern Alberta before settling in Mountain View.

Barb cherished the life-long friends she made in each place. She loved music, flowers, baking, reading and Waterton Park. She was so excited about the miraculous moves of God around the world, and constantly prayed for her family and friends.

Besides her loving husband, Darrel, Barbara is survived by her two daughters, Jeanne Kae and Tamara Lynn; her son Darrel Lane; seven grandchildren; eight great-grandchildren; her sister Jeanne; as well as numerous nieces, nephews and their families.

Barbara was predeceased by her parents Helen (nee Steffensen) and Bob Thomas; her sister Gayle; and daughter Dawn Annette.

A Memorial Service will be held at a later date, at or near Waterton Park.