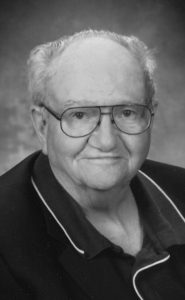 NEIL MATHESON MCDONALD passed away peacefully in Lethbridge on April 6, 2018 at the age of 85 years.

Neil was born September 16, 1932 to Mr. & Mrs. J.M. McDonald in Eckville, AB where he grew up. He had an interesting and adventurous life that took him from working in a creamery in Alberta, to drilling for salt in Windsor, ON, and then to drilling for oil both in Canada and in the Arabian Sea in the 1960s. During his time working in the Middle East he traveled extensively to places ranging from England to Japan. He returned to Canada and completed his education at Horticultural College in Olds, AB. He then settled into a career as a Fruit and Vegetable Inspector for the Federal Government which moved him from Edmonton to Lethbridge. However, he still had other interests on the side, including being part owner of a hotel/bar.

Neil married Darlene in 1975 and had an instant family with her children Dean and Danni. Neil and Darlene were avid square dancers until Multiple Sclerosis took Darlene’s mobility. Neil was a very good step-father and introduced his new children to many things ranging from skiing and travelling to playing bridge. Sadly, Darlene passed away in 1997.

After Darlene’s passing, Neil’s passion for playing duplicate bridge grew and he would play several times a week continuing up until his recent health problems a few months ago. Neil accomplished the challenging goal of becoming a Bridge Life Master. Going to coffee with him often meant replaying some of the hands of bridge he had played the night before after first catching up on the latest news about all his “kin-folk”.

Neil met Loretta Schwartzenberger and they have been companions for the past several years. They were able to do some traveling and enjoy life. Loretta’s family was always very good to Neil and included him in all of their activities.

A Funeral Service will be held at ST. ANDREW’S PRESBYTERIAN CHURCH, 1818 – 5 Avenue South, Lethbridge, AB on Tuesday, April 17, 2018 at 11:00 A.M. with Reverend Hugh Jack officiating. A Reception for family and friends will follow in the Church Hall.

In lieu of flowers and in memory of Neil, please feel free to make a donation to a charity of your choice.