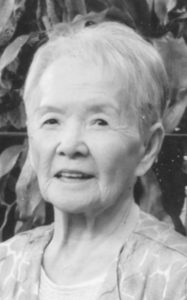 It is with deep sadness, we announce the passing of MIYEKO OSHIRO (nee KIMURA) of Coaldale, at the Chinook Regional Hospital on April 12, 2018 at the age of 89, with family by her side.

She leaves to cherish her memory, her children, Maureen (Klair) Geiger, Naomi Cramer, Dennis Oshiro, as well as four grandchildren, Keenan Geiger, Quincy (Jordan) Palmer, Evan Oshiro, and Jordan Cramer, her dear great granddaughter, Rogue Kiyomi Palmer, and another one on the way. She is also survived by her devoted sister Yaeko (George) Oshiro, Aunt Iku Shimazu in Kyushu, Japan, and numerous nieces and nephews.

Besides her late husband, Masuo, she was also predeceased by her parents, Chito and Takeo Kimura, and brothers, Haruo and Seiji Kimura.

Miyeko was born on September 17, 1928 in White Rock, BC, the oldest child of Takeo and Chito Kimura, who emigrated from Japan. In 1933, New Westminster, BC became their home.

When World War II began, Miyeko and Yaeko were sadly separated from their parents while on vacation in Japan. They were raised by family in Kyushu over the next ten years. After surviving many hardships during the War, they returned to Canada in 1945.

Miyeko and Masuo were married on November 20, 1952 for fifty-four years. She then spent the next 28 years as a farmer’s wife in Readymade, feeding chickens, harvesting sugar beets, and meticulously tending to the large farm garden with her sister, Yaeko. The family retired from farming in 1980 and moved to Coaldale.

For decades, she was an active member of the Coaldale Buddhist Church. Odori and Shibai were important cultural activities for her under the direction of her mother and odori teacher, Chito Kimura. Another pastime was juggling. She had the dexterous ability to juggle oranges and beanbags. An avid track and field athlete in her younger years, Miyeko was fiercely competitive in running, swimming, and volleyball.

In her senior years, she loved nothing more than following her grandchildren in their sports and activities. Life was immeasurably enriched with the arrival of her great granddaughter. Most recently, she enjoyed watching her in concerts and practicing her dance lessons. Sports-wise, she liked watching World Series baseball and sumo wrestling on Japan TV. Years of rheumatoid arthritis robbed her of a more active lifestyle.

The later years residing at the Sunny South Lodge in Coaldale were some of her happiest. She developed friendships and ties as close as family. Miyeko leaves a legacy of love and a void in our hearts so indescribably deep.

A private family memorial service will be held next week with inurnment to follow at a later date. Flowers and Koden gratefully declined. If friends so desire, memorial tributes in Miyeko’s name may be made to The Kidney Foundation of Canada, #507, 740 – 4th Ave S, Lethbridge, AB T1J 0N9, or to Coaldale Emergency Services, PO Box 1571, Coaldale, AB T1M 1N3.