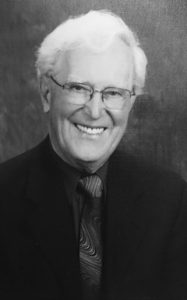 Mr. Willard Penner of Lethbridge, beloved husband of Mrs. Erika Penner, passed away peacefully surrounded by family at the Chinook Regional Hospital on Wednesday, April 25, 2018 at the age of 93 years.

Willard Penner, son of Dave and Maria Penner, was born in Sibena on September 22, 1924. In the spring of 1926, Willard and his family migrated to Canada, and travelled by wagon to Grassy Lake, Alberta where they started a farm. Willard grew up on the farm and went to school in Grassy Lake; through these years he collected many memories and stories that will be cherished for years to come. In the year 1950, Willard married his beloved wife Erika and together they built a life on the farm that they shared with their four children and grandchildren.

Willard was a man of faith and he lived it out each and every day of his life, carving out an example of service to Christ for his family that will be a lasting legacy.

Besides his loving wife Erika, Willard is survived by his 2 daughters Sharen Harms and Connie Peters; 2 sons Don Penner and Murray Penner; 11 grandchildren; 8 great-grandchildren; 2 brothers Jake Penner and Bill Penner; as well as numerous nieces, nephews and their families.

A Memorial Service will be held at 2:00pm on Thursday, May 3, 2018 at the EVANGELICAL FREE CHURCH OF LETHBRIDGE, 4717 – 24 Avenue S., Lethbridge, Alberta, with Pastor Dave Acree, officiating.

A Private Family graveside service will be held in the Grassy Lake Cemetery.

For those who wish, memorial donations in Willard’s name may be made to the Gideon’s Lethbridge Camp, c/o John Regier, 2225 27 Avenue S., Lethbridge, Alberta, T1K 6K5.