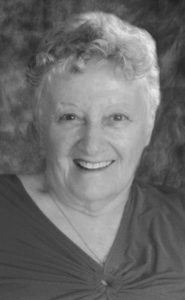 PAULINE HARROLD, beloved wife of the late Thomas William Harrold, passed away surrounded by her loving family at the Chinook Regional Hospital on Saturday, April 28, 2018 at the age of 87 years.

She was predeceased by her parents, Ralph & Sybil Walker, her brother, David Walker, her husband, Tom Harrold and her son, Gordon Harrold.

Pauline was born in Nottingham, England on August 23, 1930 to the proud parents Ralph & Sybil Walker. Pauline grew up in Nottingham, with her parents and brother, spending her younger years – between ages 9 to 15 – experiencing the troubled times of the Second World War, firsthand. In her late teens and young adult life, she began working as a hairdresser, a trade which she would also fall back on in her later years.

Pauline met her future husband, Tom, while he was stationed in England as part of his work in the Canadian Air Force. They started a courtship that would result in their wedding on November 13, 1954 in England. She moved to Canada with her new husband shortly after their wedding and started a family. They didn’t wait long before they announced the birth of their first child; a daughter, Jane. The second child, a boy, Gordon, followed, then another son, Mark, and then – while stationed back in Europe, the final addition to the family – a daughter, Jennifer. Pauline was a devoted housewife, raising the children oftentimes by herself while Tom was away on course with the Air Force. Through these years of child rearing, she found her way back to the hairdressing work, in part due to the other Air Force wives finding out that she was a hairdresser. They encouraged her to open a salon in her home and to start doing their up-do’s. In her later years, she had jobs working in the restaurant industry, plying her abilities as a great cook. She worked at the restaurant in the Woodward department store in Lethbridge.

Pauline also loved to knit, crochet, bake and do many different crafts. She often attended a variety of craft sales throughout the years to display and sell her wares. One of the things that will be remembered so fondly is her ability to make friends and help people, her infectious smile and laughter will be dearly missed.

Many thanks go out to ALL the doctors and nurses at the Chinook Regional Hospital, as well as the caregivers at Edith Cavell Care Centre, who provided care for Pauline, especially during these last few years.

A Celebration of Pauline’s Life will be held at CORNERSTONE FUNERAL HOME, 2800 Mayor Magrath Drive South, Lethbridge, Alberta on Saturday, May 5, 2018 at 1:00 P.M. with Reverend Glenda Wert officiating.

One Condolence for “HARROLD, Pauline”