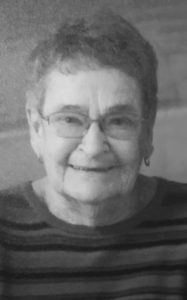 Mrs. Sheila Ryan of Lethbridge, beloved wife of the late Ed Ryan, passed away at the Chinook Regional Hospital on Friday, May 11, 2018, at the age of 84 years.

Sheila was the youngest of eight siblings born on April 13, 1934 in Lethbridge at the Galt hospital – one of the Galt babies – to Charles and Louisa (Appleton) Hulley. A competitive basketball player at Central School, she possessed inner strength and unwavering support for others that continued throughout her life. Following her school days, Sheila lived in Calgary with her sisters, and worked as a typesetter for the Royal Canadian Air Force. Then, in 1954, she began her career as a copyeditor for CHEC radio and later moved to CJOC. Through radio, she met and married Ed on May 15, 1956. Career highlights included working with remarkable people, being challenged creatively, and the many awards she accrued for creative copywriting excellence from the Radio Bureau of Canada – many of these for the Canadian Crime Stoppers Association. Sheila advocated to have CJOC become the first radio station in the Selkirk chain that negotiated the use of word processors in a copy department, supporting writers and alleviating heavy workloads. She also recalled fond memories of teaching a journalism course at Lethbridge College. Throughout the years, Sheila was a tenacious defender of women’s pay equity in broadcasting and human rights, and fought against gender stereotyping. Together with her husband, Ed, they raised their five children to stand up for their beliefs and principles.

In the mid-1970s, Sheila initiated the family’s move to an acreage east of Lethbridge. The acreage was her paradise on earth. It was here that Sheila and Ed were able to transform a piece of the southern Alberta prairie into an oasis and enjoy the peace and tranquility of the country. Sheila enjoyed the time and space to garden, entertain family on special occasions, and share her love of horses.

Outside of work, Sheila was passionate about reading, writing, cooking, and following current events. She also loved her favourite pets, Kelly, Otis and Stevie. She enjoyed our large family gatherings and inspired and supported her children and grandchildren to follow their dreams.

A Funeral Service will be held at 11:00am on Saturday, May 19, 2018 at MARTIN BROTHERS RIVERVIEW CHAPEL, 610 – 4 Street South, Lethbridge, Alberta, with Shelly Dawn Bassett officiating.

A private family interment will be held in the Mountain View Cemetery.