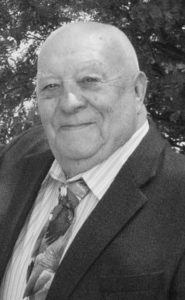 RONALD BERNARD SCHERLOSKI, beloved husband of the late Marjorie Scherloski, passed away peacefully with family by his side at the Chinook Regional Hospital on Monday, May 14, 2018 at the age of 80 years.

Ron was born and raised in the Langenburg, SK area on a farm. Ron married Marge on October 6, 1959 and they moved to Alberta. They lived in Lavoy where Ron managed a grain elevator. He left Lavoy and began his journey in the hotel business with the Heisler Hotel. They took a leap to Lethbridge where he bought the York Hotel, started Royal Taxi and even went into the restaurant business with Sherlock’s Den. Ron also managed the Alec Arms Hotel for a period of time. They moved to Bow Island when he purchased the hotel there and then to High Level where they bought the Hotel and a Motel. In 1980, they settled back in Lethbridge. Ron had learned every skill there was from caring for the hotels, so he started his business, Ron’s Repair. He built a new home and later purchased the home that him and Marge lived in until now, along with some apartments and did some amazing renovations. David started Sherlock Homes and the two of them spent many years working together. Around 2013, Marge needed Ron’s care, so he began spending more time with her and slowly retired. Ron’s main priority now was Mom, his grandchildren, crib games, time at the Casino, coffee with his buddies and never saying no to running errands for David. Ron and Marge loved to travel; Saskatchewan, Hawaii, Mexico, Las Vegas, Wendover, a camping trip across Canada in 1985 and camping with his children. Right until the time of his passing, Ron loved to watch and encourage his children and grandchildren if they were painting their homes and doing renovations. You could also find him in a hole that had been dug for a new house, plumbing the initial services.

Ron will be dearly missed by all those that knew and loved him.

Ron’s family wishes to thank the paramedics who responded to his home on May 10 and helped get him safely to the hospital, to the staff in the ER Dept., and especially to the staff in the ICU. There were many moments of hope in his last few days where Ron was able to communicate his desire to fight and carry on, but ultimately the years had taken their toll and it was time to say good-bye. The nurses and staff in the ICU showed Ron and his family compassion, dignity and respect in his final days. THANK YOU.

Ron will be laid to rest at St. Wenceslaus Cemetery in Gerald, Saskatchewan at a later date.

One Condolence for “SCHERLOSKI, Ronald”