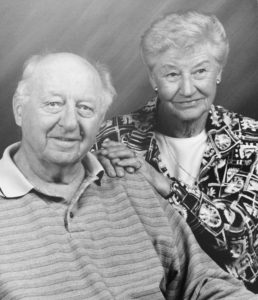 Mrs. Nita Mary Jarvie of Lethbridge, Beloved wife of the late Mr. William Morris Jarvie for 58 years passed away on January 28, 2018 at the age of 85.

Nita was born in High River, Alberta to Leonard and Annie Fitzherbert on January 31, 1932. She attended a rural school West of High River in the Foothills near the family farm. Later attending business college.

Nita moved to Lethbridge where she was employed in the office at Canadian Freightways where she met Morris and they were married June 13, 1953.

Nita worked in a few different fields over the years which included Freightways, Eatons, the Cosmotique and retired from the Lethbridge Public Library.

Nita shared memories of growing up on the farm where her mother passed while she was in her early teens and she had to grow up fast cooking for threshing crews & taking on the farm tasks. Nita spoke of riding horseback with her brother John to school.

Nita devoted her life to her family and enjoyed camping, fishing, cooking, was an incredible gardener and spent many years as a boy scout leader where she made many life long friends she cherished until her final days.

Nita supported and participated in anything her boys did whether it was cub scouts, baseball, soccer, football, farming, sand drags and very rarely missed a Saturday night at the stock car races.

Later in life Nita fought a courageous battle with cancer but managed to live in her home until six days before her passing with the help of her son and a few special friends.

Nita was predeceased by husband Morris and son Robert.

There will be a grave side celebration of Nita and Morris’ life on June 9th at 11:00 a.m. with a luncheon at the Italian Club to follow. 1511 St Edwards Blvd. N.