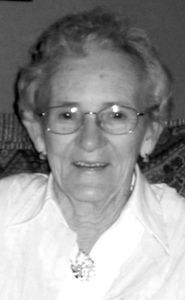 It is with heavy hearts that we announce the peaceful passing on Tuesday, Jun 5, 2018 of MRS. KATHLEEN FRANCES COOK (nee POWELL) beloved wife of the late Charles H Cook of Picture Butte at her home in Fairmont Park Extendicare in Lethbridge. She had recently celebrated her 92nd birthday. Kathleen was born 19 May, 1926 on the Powell family farm in Battersea district southeast of Iron Springs. She was the second child of James Henry Powell and his wife Edith Fanny (nee Horwood). She was raised on the family farm and attended the nearby Battersea one room school. At age 21, she married Charles H Cook Jr. in Lethbridge on 3 Jun 1947. They built a house on the nearby Cook Bros. farm where they raised their 2 sons. In 1967, Kathleen and Charles retired to a home on Highway Ave. in Picture Butte. In Nov 2003 she moved for a short time to Piyami Manor in Picture Butte followed by longer stays at Piyami Lodge and Piyami Place. In March, 2011 Kathleen moved to Fairmont Park Extendicare in Lethbridge where she has remained under their excellent care for the last 7+ years. As well as her parents James and Edith Powell, Kathleen was predeceased by her husband Charles in 1994, two sisters, Mildred Perry and Marjorie Hudson and two brothers, Trevor (Jim) Powell and Clarence Powell. Kathleen will be sorely missed by her loving family: sons Bill Cook (Linda Sands) of Calgary and Roy Cook (Trish Cullen) of Lethbridge; four grandchildren: Tracey Bryan (Brad) of Bend, Oregon, Christie Wall (Brent) of Pueblo, Colorado and Jason Cook (Corrine) and Carey Martens (Jason) both of Lethbridge and 11 great grandchildren: Samantha, Elise, Ethan and Abby Bryan, Elizabeth, Alexander, Victoria and Katherine Wall, Hunter and Gemma Martens and Dylan Cook. She will also be sadly missed by her sister Mrs. Helen Davies of Lethbridge and brother Willard (Bill) Powell and his wife Isabel of Calgary, brother-in-law Oliver Perry of High River, sister-in-law Dorothy Powell of Creston, BC along with numerous nieces and nephews on both the Cook and Powell sides of her family. The family wishes to especially thank the wonderful staff at Fairmont Park Extendacare who have lovingly cared for Kathleen in her most challenging years. Thanks also to the staff at Piyami Lodge and Piyami Place in Picture Butte, as well as Dr. Mohammed in Picture Butte and Dr. David Stewart in Lethbridge. Family and friends are invited to pay their respects at 1:00pm on Wednesday, June 13, 2018 at MARTIN BROTEHRS RIVERVIEW CHAPEL, 610-4th Street South, Lethbridge, AB. A Funeral Service will be held at 2:00pm on Wednesday, June 13, 2018 at MARTIN BROTHERS RIVERVIEW CHAPEL, with Reverend Glenda Wert, officiating. Interment to follow at Archmount Cemetery. In lieu of flowers, donations may be made to the Alzheimer’s Society at #40, 1202 – 2nd Ave S., Lethbridge, T1J 0E3 or any other charity of your choice.