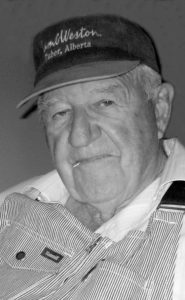 Cecil Robert Wiest, our family patriarch, passed away peacefully at St. Michael’s Palliative Care Center in Lethbridge on June 6, 2018 at the age of 91.

Cecil was predeceased by his loving wife of 62 years, Olivia; his daughter Linda; his parents, Edith and Clarence Wiest; mother and father in law, Rakel and Rasmus Hobberstad; along with numerous siblings, brothers and sisters in-law, nieces and nephews.

Cecil was a people person; he enjoyed a good conversation and loved a great debate. His love of community led him to enter politics in 1965 when he became the councillor for Division 6 of the M.D. of Taber. He became the longest running councillor in Alberta serving 15 terms and 46 years, retiring when he was 84, however his passion was farming and family. He and Olivia moved onto their farm in 1952. He worked hard and he loved every minute of it, reluctantly retiring at almost 90. His family was so important to him and he enjoyed family gatherings and watching the family grow. In 2012 he married Louise Wilson and entered upon a new journey in his life, less worry about work and a little more time for fun.

Family and friends are invited to pay their respects between 7:00pm and 8:00pm on Sunday, June 10, 2018 at MARTIN BROTHERS RIVERVIEW CHAPEL, 610 4 Street South, Lethbridge.

A Funeral Service will be held at 2:00pm on Monday, June 11, 2018 at the ENCHANT COMMUNITY HALL, 127 Center Street, Enchant, with Mr. Ray Speaker, officiating. Interment will follow in the Enchant Cemetery.

In lieu of flowers, those who wish may make a donation to the Enchant Community Association, Box 1921, Enchant, AB T0K 0V0, to the St. Michael’s Palliative Unit at St. Michael’s Health Centre at 1400 9 Ave S, Lethbridge, AB T1J 4V5 or to a charity of your choice.