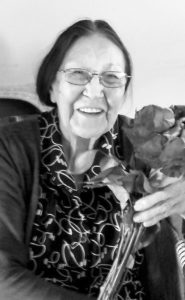 LEONA EAGLE SPEAKER “Mokakiaakii” (Smart Woman of the Center Lodge), Blackfeet, passed away after a long illness on June 7, 2018 at the age of 88 years.

Leona attended Browning Public School and completed Grade 11 in 1948. She married Glen at the St. Thomas church in Cardston, AB in 1957. Glen and Leona worked and traveled with their young family doing various farm work in the U.S. and Canada. In 1968 they moved their family to Seattle, Washington for employment and educational opportunities for themselves and their children. They worked very hard in the employment field while teaching their children traditional culture in the Blackfoot way. During the early 1970’s the pow-wow movement began in the big cities in the U.S. that brought many Native families together to share their song and dance. The Eagle Speaker and Mosquito families organized singing and drum practice and pow-wow dance practices every Thursday night at the Blackfeet Indian Center in Seattle to help their children understand their culture more.

While in Seattle, Leona was employed as a seamstress for Sanford Leathers, a maid/home helper for various church families and a janitor for the doctors’ quarters at the University Hospital.

In 1968 Glen and Leona moved home to Alberta, Canada to care for her mother-in-law Julia Eagle Speaker, she was elderly and ill. Leona promised her father-in-law Charlie Eagle Speaker that she would care for Julia on his death bed. During her life in Canada she was employed as a janitor for the Blood Tribe Administration and Standoff Elementary school. She loved catering for various events in connection with the Head Smashed In Buffalo Jump and was an avid volunteer for the Kainai Food Bank from 2006-2009 on the Blood Reserve. Glen and Leona also

became members of the Calgary Stampede Indian Village encampment from 1979-1985 and went on to represent the Stampede as a dance troop to Australia, New Zealand, and Germany. One of her favorite places was Hawaii on these trips, and they joined the sacred Horn Society of the Blood Reserve.

Throughout Leona’s life her sole purpose that meant the most to her was teaching her children and grandchildren traditional Blackfoot ways of cooking, gardening, berry picking, collecting medicinal plants, sewing, beading, reading and storytelling. She loved preparing meals with her small grandchildren, she would always tell them, “Someday you’ll be doing all the work yourself so watch closely…” Leona also loved watching her children and grandchildren sing at pow-wows and participate in pow-wow dancing. Christmas and holidays were spent decorating her home for family. A comfortable home and big festive meals were her specialty. Leona had a special place in her heart for her cats and dogs, they understood her through Blackfoot language. There are so many things we will miss about our mother, thank you for all the kind words, sound direction and priceless advice. We’ve grown to be the people she wanted us to be– people who can handle things in life.