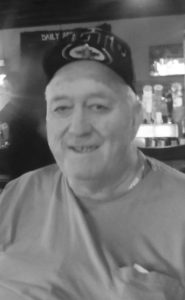 ROBERT “BOB” KENNEDY, beloved husband of the late Mary Christine Kennedy, passed away peacefully in his sleep at home in Lethbridge on Saturday, June 9, 2018 at the age of 74 years.

Besides his loving wife Mary Christine Kennedy, he was predeceased by his brother Brian Kennedy.

Bob was born in St John, New Brunswick on Jan 3,1944 to Beverly Kennedy and Lois Mitchell. He grew up in Youngs Cove, New Brunswick where he had many fond memories of the times he spent on the Kennedy wharf. Bob always dreamt of the day when he would return home to New Brunswick. Bob worked for CP Rail for 24 years and for Transport Canada for 13 years. He married Chris in 1967 and in 1969 their son Mike was born, he was Bob’s pride and joy. Bob would often refer to Mike as his #1 son.

Bob worked in Calgary for Transport Canada where he would eventually retire in 1999. In 2014 he moved to Lethbridge, Alberta to be closer to his family. Bob had many great qualities, those that knew him will forever remember him for his unique ability to remember so many details. He always remembered dates and numbers so well.

Bob had a big heart and would do anything for anyone in need. He would be happy to sit and have a beer with anyone who would lend an ear. Bob’s proudest moments were spent at whatever sporting event his grandsons were playing in. His most favorite of them all was going to the hockey rink to cheer them on.

In his last few years he passed the time sharing many laughs with his good friend Ellie Whitehead while watching whatever sporting event was on TV, except for curling, Ellie would have to do that on her own.

Bob will be missed by many.

We would like to thank Lethbridge Family Services for all the wonderful care they have provided our dad over these past four years. Bob was fortunate enough to have some of the kindest, most caring and thoughtful people help him each and every day.

One Condolence for “KENNEDY, Robert”