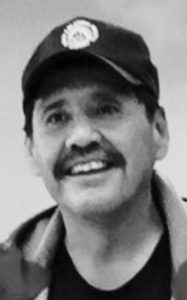 John, the youngest son of Eddie & Adelaide Heavy Shields, passed away peacefully at his home in the Buttes on June 7, 2018.

John, born into the Aakaipokaiksi and Ni’taitsskaiks clans, was cherished by his parents. He spent his early childhood in the idyllic setting of the Blood Band Ranch at the northend of the reserve. It was in this home that John learned the language and the ways of his parents and grandparents. John was fluent in Blackfoot and rich in Kainai culture.

It was also as a young boy that John got the taste for hockey and rodeo. His Dad would bring him to Kainai Chiefs’ practice and John would be allowed to lace up and skate with the big guys.

Having lost his dad at an early age, he was doted upon by his mom and his siblings.

John’s education led him to employment in places such as Bowden, Calgary, and Vancouver in various capacities such as teaching Blackfoot at Lethbridge Collegiate Institute and as Recreation Director at Drumheller Correctional Centre. He also served as Program Development Officer at the Calgary and Vancouver Friendship Centres. John earned his Level III Coaching Certificate and being only one of three in Canada with this training allowed him to coach anywhere in the country. John was Minor Hockey Coordinator and Alberta Native Provincial Chairperson; he was instrumental in bringing the Alberta Native Provincials to southern Alberta for the very first time. In later years, John received bobcat and landscape training which led to his owning and operating his TBR Landscaping Business.

John travelled extensively throughout Canada and the U.S. where he met and made many friends. This included the late Prime Minister John Diefenbaker and his lifelong Boston Bruin hero, Bobby Orr. John also took Brad far and wide for hockey to places such as Atlanta, GA. He dreamed of one day visiting Red Square in Moscow. John shared a passion for golf with special friends Brent, Winston, Pierre and Rick. John memorialized his dear granddaughter Taaliyah in a special golf tournament each summer.

John used his experience in hockey, rodeo and golf to advocate for the advancement of youth through recreation and sport. His son Brad adds that his dad’s sports career extended to track and field (long distance runner), fastball (catcher) and football. John, the all-round athlete, ensured that this drive encompassed and influenced his son and grandsons. He was a mentor to many.

His parents’ legacy – a strong work ethic – was passed on through his own teaching and example to his children. John was known for his hospitality and kindness and his loyalty as a friend will be remembered by many. John, your legendary home-cooked meals (chowders, chili’s and holiday dinners), spotless home and expressive laughter will be forever missed by us all. This is especially true of your Saturday morning breakfasts for the Martindale gang. We were so blessed to have known your love and we promise to keep it alive!