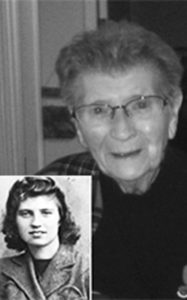 Margaret (Marge) Richardson, beloved wife of the late Bus Richardson of Picture Butte, Alberta passed away at Chinook Regional Hospital on June 9, 2018 at the age of 91.

Marge was born Aug 21, 1926 in Worthing, Sussex England and then made her journey to Canada as an English war bride in 1946.

She arrived in Halifax after travelling 2 weeks across the Atlantic on the Aquitania. From there, she travelled across Canada by rail stopping in Montreal ad Medicine Hat. Bus picked her up from the Hat in a Model A Ford. They settled in Raymond, followed by Stirling, Pikani, Iron Springs, Park Lake, and finally residing in Picture Butte for their retirement years.

Marge loved kids and cared for many as if her own. She had trouble saying no to anyone in need. Those who knew her as “Mum” or “Grandma” were truly blessed and their lives enriched. She taught the skills of life by her actions and her honest blunt approach instilling confidence in many.

The Piyami Manor became home after Dad’s passing where she made many good friends, including the health care workers who cared for her. Mum was so grateful for these individuals. Without a doubt, Marge Richardson will be missed by many for years to come.

Marge’s wish is for a private graveside service. Arrangements to be made at a later date.