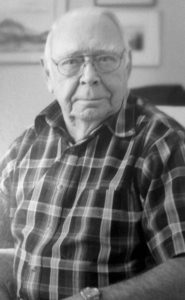 Dr. Keith Victor Robin, beloved husband, father and grandfather, died in Lethbridge on Friday, June 8, 2018, at the age of 92. He is survived by his wife, Jean, and by his children and their families: Bruce and Sandra Robin of Cochrane, and their sons Colin Robin of Calgary and Cameron Robin (Jessica Bateman) of Cochrane; David and Laura Robin of Ottawa, and their daughters Emily Robin (Jordan Sauer) of Vancouver, and Jessica Robin of Toronto; and Joan and Gerald Rogers and their son Gerald Rogers, of Lethbridge. Keith also leaves his sister and brother-in-law, Jeanette and Bryan Liden, of St. Albert, and their family, as well as his cousins, Lois Powell of Victoria and Ron Robin of Ottawa and his family.

Keith was born in Lethbridge on May 7, 1926, to Fred and Ivy Robin, and spent his childhood in Lethbridge, Calgary, and Edmonton. In 1951, after each completing education degrees at the University of Alberta, Keith and Jean Black were married, and they moved to Southern Alberta, where they both began teaching at Barrhill School. Keith served as principal at Turin, and then taught in Lethbridge at Hamilton Junior High School and LCI. In 1966, Keith finished a Master of Education degree at the University of Colorado, and in 1967 he began work at what was then Lethbridge Junior College as Director of Continuing Education. In 1972, Keith completed his Doctor of Education degree at the University of Colorado. He remained at the college as Dean of Instruction and later as Vice President Academic and, after retiring in 1983, he became the director of the College Foundation. In 1987, after more than 10 years on the University of Lethbridge Senate, Keith was appointed Chancellor. He was awarded an honorary Doctorate from the U. of L. in 1992.

Keith was a willing and dedicated volunteer in his community. He spent many hours working for the Kiwanis Club of Lethbridge, the Lethbridge and District Music Festival, the Alberta Heart and Stroke Foundation, the Science Alberta Foundation, and many other organizations. In 2009 he was honoured as Lethbridge’s Citizen of the Year. Keith and Jean have been members of McKillop United Church since 1957, and Keith served his church as Treasurer and as a Trustee.

Keith loved golf, and spent many happy days at Magrath Golf Club. He was a long-time Hurricanes fan, and also enjoyed gardening, and watching baseball and curling. He liked to travel whenever he could, and was always ready to go for coffee. Keith lived his life with enthusiasm and energy, and we will miss him.

A Memorial Service will be held at 2:00pm on Monday, June 18, 2018 at McKILLOP UNITED CHURCH, 2329 – 15 Avenue South, Lethbridge, Alberta, with Reverend Trevor Potter officiating. A private family burial will take place in the Mountain View Cemetery.

One Condolence for “ROBIN, Dr. Keith”