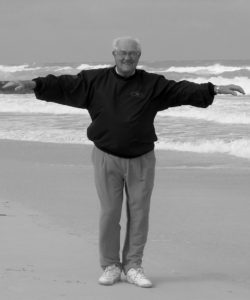 It is with great sadness that the family of Dr. John “Ed” Andrews announces his passing on June 16, 2018 at the age of 96 years in Lethbridge, Alberta.

He is survived by his beautiful wife of 70 years Mina Andrews (Craig) and their children and families: son, Curtis Andrews and Katia Papasoff of Halifax and their sons Samuel (Fredericton) and Sebastian (Ottawa); daughter, Janine Andrews and Larry Anderson of Edmonton and their dog Lilly (Edmonton); son, Craig Andrews and Chris Andrews (Pitt) of Lethbridge and their son Ian (Edmonton); and daughter, Lynn Paterson (Andrews) and Allister Paterson of Montreal and their daughter Nikki (Lake Louise) and son Cory (Montreal).

Dr. John “Ed” Andrews was born in St. Clements (near Selkirk), Manitoba in 1922 to father Frederick George Andrews (of St. Andrews, New Brunswick) and mother Beatrice Eveline (of East Selkirk, Manitoba). After serving with the Royal Canadian Air Force from 1942 to 1945 as a flight instructor he attended the University of Manitoba and graduated with a B.S.A. in 1949. He took post graduate training in plant breeding, genetics and plant pathology at the University of Minnesota where he received a M.Sc. degree in 1950 and a Ph.D. in 1953.

His research career began at the Winnipeg Research Station in 1949, and he was transferred to the Lethbridge Experimental Station in 1951, where he continued as a research scientist until 1959. His major early research contributions at Lethbridge were the development of WINALTA, a widely grown winter wheat, and the development of laboratory techniques for assessing hardiness in winter wheat.

Beginning in 1959 Ed’s career evolved from research scientist to Director in charge of several major research centres in Canada and East Asia under the auspices of Agriculture Canada. From 1959 to 1964, Ed was the Director of the Research Station at Brandon Manitoba where he began his management learning curve. By 1965 he accepted the position of Director of the Research Station at Swift Current, Saskatchewan which was a larger research enterprise in one of the most arid regions of Canada.

Ed’s next stop was back to Lethbridge in 1970 as the Director of the Lethbridge Research Station which at that time was the largest of the Agriculture Canada’s Research stations or institutes with 80 research scientists and engineers. During his tenure as the Lethbridge Director, a new Agriculture Centre was planned and constructed to provide new facilities for the Research Centre and to bring together at the same location all of the extension and development staff of Alberta Agriculture.

While in Lethbridge he was also the Director of the All India Co-ordinated Research Project on Dryland Agriculture, Hyderabad, India (1969 – 1982). This project involved research by over 200 scientists at 23 Centres in India; introducing the results to farmers and training programs for extension staff and village workers. During the same period (1978 – 1982) he was also the Director of Dry Zone Research and Development – Sri Lanka, Kandy, Sri Lanka. This project involved research and development activities to improve food production in dry zones of Sri Lanka.

In October 1981, Dr. Andrews was appointed Director General, Western Region, Research Branch, Agriculture Canada. In this capacity he was responsible for all agricultural research carried out at 15 research stations and 10 experimental farms or research substations in western Canada including a staff of 1,374.

In 1983, Dr. Andrews became the senior advisor to the Assistant Deputy Minister, Research with major responsibility for special international projects. He held this position until his retirement in 1987. During his 38-year career with Agriculture Canada, he was not only devoted to his work, but also enjoyed serving on many provincial, national and international committees.

Ed was also an active community member in every city where he and Mina lived. He was a member of the Lethbridge Rotary Club, the Kinsmen Club, their favourite Lethbridge bridge club, the Legion, the curling club, and the Lethbridge Country Club where he helped to found the Elderly Gentlemen’s Golf Society (EGGS). Ed’s passion for research and the value of post secondary education led him to serve the University of Lethbridge as a founding member of the Board of Governors and a member of the Senate.

Ed will be fondly remembered by his family and friends for:

• A warm smile, wicked sense of humour, expertise as a phenomenal dancer in every genre, his love of hosting a

great party and dressing up and attending formal events;

• Making pancakes on Sunday morning for his kids so he could avoid church, carving the perfect turkey, teaching

us to respect others and their cultural protocols, and to take pride in everything we do;

• His frugalness and insistence that we don’t waste food, money or time;

• His obsession with the news, world and local politics, and later just snoozing in his recliner and forgetting about it;

• His love of games and sport, his expertise in playing bridge, teaching hunting and fishing skills to his kids,

savouring a good curling shot, teaching us to play snooker, his Arnold Palmer golf swing, his incessant search for

golf balls in out of bounds areas, and his detailed knowledge of every rule of golf;

• His love of flying single engine Harvard’s, knowledge of aircraft types, and better known as the “Queen’s” pilot;

Mom’s kitchen appliances and never putting them back together;

• His love of travelling the world with Mina, his kids and his close friends;

• His love of living in warm, windy and arid locations around the world;

• His incredible memory for details including the name of every place, city, historic site, village, river crossed, and

person met on his world travels;

• His ability to tell a good story – which got better over time – and his excellent public speaking skills;

• His strong pride and enduring love for his family; and

• His everlasting love for his sweetheart and soulmate Mina.

The family sincerely thanks the Chinook Regional Hospital staff, including the nurses in Unit 4C, Dr. J. Burke, Dr. McIntyre, and Dr. C. Walton; the staff at St. Therese Villa, especially the LPN’s, HCA,s and others from two west; AHS Home Care RNs; Dr. Strank; and Ava Matisz (special companion to Dad and Mom) for their compassion, care, and support of Ed while he transitioned through his final stages of life.

Flowers are gratefully declined. For those who wish, charitable donations may be made to the University of Lethbridge or the Canadian Red Cross in the name of Dr. J. E. Andrews.