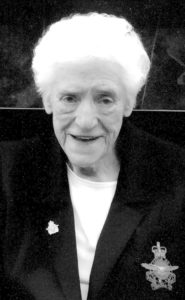 Mrs. Edith Aileen Gillis, beloved wife of the late Mr. William ‘Mac’ Gillis of Lethbridge, Alberta passed away, surrounded by her family and friends, in Red Deer, Alberta on Monday, June 18, 2018 at the age of 83 years. Edith’s short time in Red Deer led to some very nice friendships with other residents and staff at Extendicare Michener Hill. Edith completed her schooling in Lethbridge, Alberta and later served in the Royal Canadian Air Force, in many different locations in Canada. After marrying Mac in 1959, she lived in many places including Outlook, Saskatchewan, Hudson’s Hope and Mica Creek, British Columbia, Radisson, Quebec and then returned to Lethbridge, Alberta. Edith was actively involved for fifteen years, as the Akela, with the First Mica Creek Wolf Cub Pack and the Eighteenth Wolf Cub Pack. She was also a long time member of fifty-five years with Laurel Chapter #43, Order of the Eastern Star, and was Worthy Matron five times, a member of Sakkara Temple #115 Daughters of the Nile, and Past President of Iras Nile Club #4 in Lethbridge, Alberta. She was also a member of the General Stewart Branch #4, Royal Canadian Legion and an Honorary Member of Chinook Unit #53, Korean Veteran’s Association of Lethbridge, Alberta. Edith had many friends and sisters of the Chapter, that she thought very highly of and thank them for being there for her. Edith will lovingly be remembered by her sons, Allan of Durham Bridge, New Brunswick and Robbie (Doris) of Red Deer, Alberta; and her grandson, Conrad Flynn. Edith was predeceased by her loving husband, Mac in 2007. Upon the request of Edith, there be no Funeral Service. Instead, her family will be having a Private Gathering to scatter her remains. If desired, Memorial Donations in Edith’s honour may be made directly to a charity of the donor’s choice. We would like to thank all for the welcome and care received during her stay at Extendicare.

Condolences may be sent or viewed at www.parklandfuneralhome.com.