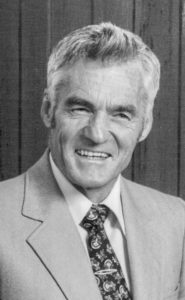 The Lord is my shepherd I shall not want. Psalm 23.

Paul Harding passed away on Monday, June 18, 2018 at the age of 93 after less than a year in the capable care of Alberta Health Services and the Edith Cavell Care Centre. He was born on April 9, 1925 in North Sydney Nova Scotia, son of Fred and Mabel Harding. After completing grade twelve, Paul joined the RCAF with surplus air crew recruits, he then joined the army. After the war Paul studied Civil Engineering at Nova Scotia Technical College in Halifax. He graduated in 1952 and worked with the Department of Transport, the City of Lethbridge and the University of Lethbridge. With the support of his loving wife Ina, Paul enjoyed a long healthy and active retirement doing the things he loved, which included skiing, tennis, curling, cycling, skating, table tennis and spending time with his family and friends. In 1953 Paul and Ina were married at First Baptist Church in Calgary. Then they moved to Lethbridge where they raised three children: Linda Broderson (Rick), Alice Paradis (Jean) and Derek (Yolayne Jang). His legacy continues through his seven grandchildren and five great grandchildren: Dustin Gould (Katrina), Colette Rhodes (Thomas and their son Adam), Michael Paradis (Claudia), Julie Kiew (Justin and their children Eliana and Matteo), Daniel (Christina and their children Benjamin and Lucas), Kimberly, and Trevor. A Funeral Service will be held at 2:00pm on Wednesday June 27, 2018 at the FIRST BAPTIST CHURCH, 1614-5 Avenue South, Lethbridge, Alberta with Dr. Bruce Martin, officiating. Cremation will be entrusted to Martin Brothers Funeral Chapels.

One Condolence for “HARDING, Paul”