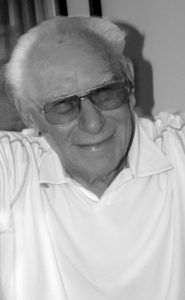 Dr. Victor Edward (Ted) Crapnell passed away peacefully in Lethbridge on Wednesday June 20, 2018 at the age of 89 years. Ted was born and raised in Brighton England. After he finished high school he joined the British Army to do his National Service for the Education Corps. in Singapore and Kuala Lumpur. He attended medical school at University College London, did post graduate work at Brighton and Cuckfield Hospitals. Ted joined the Royal Canadian Air Force and immigrated to Cold Lake, Alberta in 1955. Ted practiced medicine in Lethbridge and Picture Butte for over 30 years. He retired in 1989 and resided in Lethbridge through most of his retirement. Ted is survived by: his brother Tony Crapnell; his 3 children Lisa MacKay (Ross), Victor J. Crapnell (Joanne McGachie), Kirsten (Kesha) Crapnell (Zach Rosenthal); and two grandsons Benjamin and Alexander Rosenthal A Memorial Service will be held at 11:00am on Monday, July 2, 2018 at MARTIN BROTHERS RIVERVIEW CHAPEL, 610-4th Street South, Lethbridge, AB., with Mr. Rick Casson, officiating. Cremation has been entrusted to Martin Brothers Funeral Chapelss. Time does not ease the passing …it is always too soon.