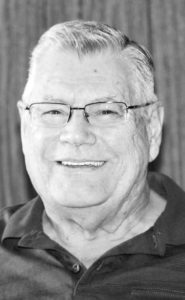 DAVID EUGENE LAURIE, beloved husband of the late Darlene Josephine Laurie of Taber, AB, passed away, surrounded by family, at St. Michaels Palliative on Tuesday, June 26, 2018 at the age of 74 years.

He was predeceased by his wife Darlene, parents, Bruce and Mae Laurie, sister Peggy and brother Clive.

David was born in Calgary, AB, on April 30, 1944, and shortly after, moved to Cranbrook with his family. It is here that he went to school and also met the love of his life, Darlene. After getting married in Claresholm, they moved to Lethbridge, where David completed Barber School and started Barbering at the Marquis Hotel. David entered a partnership with Keith Pederson, a classmate from Barber School, and cut hair at Central Barber Shop in Taber for over 50 years.

David and Darlene resided in Taber for the rest of their years, where they raised their family. David’s hobbies included being a member of the Taber Pistol and Revolver Club, Lethbridge Fish and Game Association and the Taber Shooting Foundation.

At David’s request no formal funeral service will be held.

In memory of David, donations may be made to the St. Michael’s Health Centre – Palliative Care Unit, 1400 – 9 Avenue South, Lethbridge, AB, T1J 4V5.