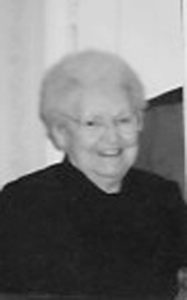 Dorothy Albert (Key) Lait passed away after a long illness at the Good Samaritan’s, Park Meadows Village on Tuesday, July 3, 2018 at the age of 95 years.

“Dot” as she often went by, was born in Bellevue, Alberta on September 6th, 1922, She was the youngest of 6 children born to Dr, James and Effie Key. Many times we laughed as she entertained us with tales of growing up in a household of six kids.

In 1961 in her 40’s she attended the Grace Hospital school for several months to earn an LPN degree and was the valedictorian for her class. After graduation she worked at the Grace hospital in Calgary.

Dot and Wilf lived in Calgary for most of their married life and were original members of the Calgary Winter Club. Mom loved the game and did very well at it. Winning many Bonspiels and also the prestigious Tournament of Pearls in 1963. She was one of 3 women in 1969 nominated for Sportswoman of the Year in Calgary.

In later years they lived in St. Albert, where Dad opened his own Automotive Business. As usual, in a family situation Mom became the “extra staff person” helping with cleaning the store and doing whatever else was needed.

After selling the business they moved around from place to place, (Osoyoos BC, Didsbury AB, Lethbridge AB. etc). They kept active curling, golfing, bowling, and spending time with family and friends. They enjoyed their church and the many activities they were involved in. Mom loved to “help” and enjoyed fixing meals and sharing with others. She played the piano by ear and for years was the alto voice as she and her sisters sang duets and joined choirs.

In Mom’s last years she struggled with poor hearing and eyesight. She spent her later life under the great care of the Good Samaritan Facility in Lethbridge.

Now we are grateful she is with her Savior and once again well. We love you Mom and miss you.

One Condolence for “LAIT, Dorothy”