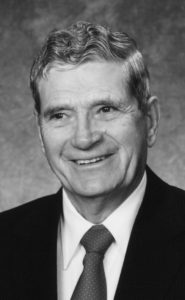 With heavy hearts and great sadness we say “good bye” to a beloved husband, father, grandfather & great-grandfather, RICHARD “DICK” GORDON RITTENHOUSE, on Friday, July 13, 2018 at the age of 93 years.

Dick was born in Edmonton, Alberta on April 12, 1925 and raised on the family farm near Hardisty, Alberta. He attended a rural school called “Science Hill” and became the janitor of the school at age 11. Dick would walk 1 1/4 miles to light a fire in the wood and coal burning school heater, even on the coldest days.

In later years he farmed; first with horses and later with a tractor. During the winters Dick worked in the lumbering and logging industry in the Edson area. Sadly, allergies forced him to give up farming in the fall of 1948 so he came to Lethbridge to visit his sister where he has resided ever since.

Dick has done many things through the years. He operated the Hilltop Service Station and in 1952, built his own service station on 13 St. North. He sold the service station in 1958 and went into the Heating and Air Conditioning business. He ventured into General Insurance and then manufactured his patented live stock waters and hog feeders. He later expanded into Mechanical and General Construction.

Dick enjoyed each new challenge and appreciated all his employees and sub-trades. He was a man of boundless energy and zest for life, teaching us that there must be time to play as well as a time to work and that work is a privilege denied many. The family spent many summer days at the Christina Lake Resort in B.C. for camping, water skiing and family fun.

Dick and Ruth loved to travel. After semi-retiring they enjoyed many trips in their motor home, travelling extensively throughout Canada and the U.S.A and spending many winters in Palm Springs, California.

Dick was a very private person but would go to great lengths to help family and friends; he always had time for everyone.

He will be dearly missed by his loving wife Ruth and forever be remembered by his family: Dr. Bryan (Jean) Rittenhouse and their son Dr. Neil (Karen), great-grandson John Richard and daughter Allison; David (Leena) Rittenhouse; Diane (Laurent) Beaudin and their two daughters, Erin (Leo), great-grandchildren, Vincent, Carmela and Kimberly (Pat); Elaine (Dr. Anders) Anderson and their two sons, Anders and Eric, as well as numerous nieces and nephews.

Family would like to thank the wonderful staff on 4C at the Chinook Regional Hospital for their kindness, support and caring hearts.

Flowers are gratefully declined. For those who wish, charitable donations may be made to the McKillop United Church (Growing the Dream Fund): 2329 15 Ave S, Lethbridge, AB T1K 0X5, or a charity of your choice.

At his request, a private family service will be held at a later date.