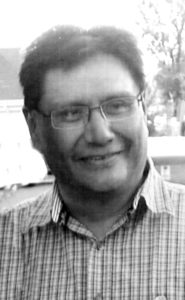 HEAVY RUNNER, Iinakiitapii (Small Person), born September 21st, 1966 at the Blood Indian Hospital. Passed away peacefully at the Lethbridge Regional Hospital, surrounded by family on July 28th, 2018 at the young age of 51.

Stephen attended school locally, graduating from Cardston High School in 1984 and later at the Lethbridge College, becoming a Diesel Mechanic.

Stephen played a major role in many people’s lives, often becoming a father, brother, son and mentor to his family, extended family and friends. Stephen has considerable Horsemanship skills that he shared with everyone around him, often teaching his siblings, nieces/nephews and friends, everything he knew about horses. He was the type of man that would do anything and everything to help others, even giving away his last dollar or the shirt on his back. He was kind, humble, loving, comical and a compassionate man, who led a very influential life. His greatest joys in life were his children, Jesse and Cassie; grandson, Shooter and family. He was often seen smiling or laughing, famous for his singing and dancing, spreading happiness to everyone around him. At the time of his passing he was a member of the Brave Dog Society (Kaanaatsomiitaa). He was a helping hand at many traditional gatherings. His hardworking attitude and strong will made him an asset to his friends and family.

The family would like to thank the staff on 4B at the Lethbridge Regional Hospital, for the care and compassion they showed to Stephen during his final days.

One Condolence for “HEAVY RUNNER, Stephen”