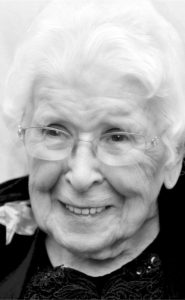 Mitz was born September 10, 1913 in Ebor, Manitoba, one of ten children of James and Mary Sproule. She resided there until moving to Lethbridge in 1943 with three daughters and her husband, Cecil, who had been posted to the PoW camp there as a Veterans Guard. Twin daughters were born to them in Lethbridge in 1944. In addition to their own five, Mitz and Cecil soon became extended ‘Ma and Paw’ to the six Linders girls who lived across the street. Before moving to Lethbridge and becoming mother to so many, Mitz was an active and accomplished athlete; curling in the winter and playing tennis in summer, she hauled her three children along by wagon or sled. She was also very active in the Women’s Institute in Ebor. In Lethbridge, she directed that energy into work as a member of St. Augustine’s Anglican Church Sanctuary Guild. When her girls were established in their chosen lives, Mitz took up league bowling winning a trophy in the 1966-67 season. But above all else, Mitz is especially remembered for her endless and selfless devotion to her children and grandchildren.

The family is profoundly grateful to the staff of Extendicare Fairmont Park for their exceptional care of Mitz over the years of her residence there, and especially during her final weeks.

A memorial service will be held at a later date.