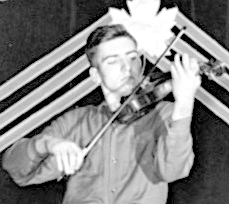 Born in Smoky Lake, Alberta, Nick spent his childhood in Mundare and his University years in Edmonton, Bristol England and Ottawa. Between degrees he taught high school at several small Alberta towns – Evansburg, Coaldale and Jasper Place. In the early 1960’s he planted his feet in Lethbridge teaching chemistry at the Junior College and in 1965 became one of the founding professors of the University of Lethbridge Chemistry Department. He retired from the University of Lethbridge in 1994.

Nick had two mistresses in his life – his garden and his violin. It was while waiting for a violin lesson as a young man he met his future wife Anne. He was a member of the Lethbridge Symphony Orchestra for several years and even after leaving continued to practice and perfect his bowing well into his seventies unknowingly serenading the neighbours when the study window was open.

Upon moving his family to the new suburb of West Lethbridge in 1975 Nick joyfully planted the entire yard in a garden including a front ‘lawn’ of potatoes much to his family’s embarrassment. Summer days henceforth were dedicated to making things grow. While his experimental tendencies led to the unusual – like kohlrabi – appearing on the dinner table, his real passion was tomatoes. A record 100 tomato plants of numerous varieties flourished under his care one summer. Nick often lamented that the water and labour he poured into his garden were not cost effective given the prices of produce at Safeway. Yet he refused to scale back and when his family and neighbours had no more room in their fridges he happily donated an abundance of fresh vegetables to the local food bank.

Nick delighted in the arts and marvelled at the creative mind. He could not resist a richly illustrated book – especially if it was in the bargain bin. If there were multiple copies he would purchase two so he could give one away.

For all his fascination with the world’s wonders he was an armchair traveller, preferring the comforts and predictability of home, PBS and CBC, or relaxed road trips to nearby destinations to the chaos of airports. He had hoped for one last lunch at the Prince Of Wales Hotel in Waterton this summer.

He is remembered fondly by his family for his lifelong love of ice cream. Despite delighting in the variety of current day flavours he maintained nothing beats classic neapolitan.

Whether you met Nick in passing, were family, friend or student you were treated to his wit and word smithery. To have the last word in a battle of puns with him was a major triumph.

Nick is remembered for his generosity and kindness which extended to all creatures great and small, ugly and cuddly. In the years he walked to work at the university he was sure to carry in his pocket dog cookies for the canines he encountered along his route. Even in his final year in sub zero temperatures he tramped thru the snow to refill his bird feeders and spill some seed for the deer despite their having raided his garden in previous summers. He supported a long list of charities focusing on the environment and championing a more just world.

Nick is survived by the two loves of his life – his wife Anne (Buzinsky), his daughter Alyssa (Matt Drown), a one of a kind book collection, treasured record collection, cherished neighbours and friends and a library of garden seeds carefully labeled and methodically organized.

A celebration of life for Nick will be held Sunday, August 26th beginning 12 noon at his home 13 Loyola Place, West Lethbridge. Remembrance at 1 pm.

Messages to the family may be shared at mckenziefuneralservices.com