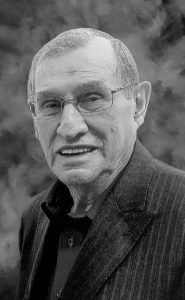 JOSEPH “JOE” VINCENT FABBRI, beloved husband of Grace Fabbri, of Lethbridge, passed away peacefully on Saturday, August 18th, 2018 at the age of 88 years. Along with his wife Grace, he is lovingly remembered by his children, Coralee (Craig) Watson, Brenda (Lynn) Rosaine, Cam(Maria) Fabbri and Brian (Robin) Fabbri; his grandchildren, Micaela (Demetrious) McBride, Ryan (Jolene) Watson, Wanita (Kit) Love, Jovi and Jamie Fabbri and Sayler, Paris and Joseph Fabbri; his great-grandchildren, Brooklyn and Jaden Mc Bride, Carson and Cassy Love and Wyatt and Beau Watson as well as his sister, Rita Berlando. Joe was predeceased by his parents, Joseph and Irma Fabbri and his sister, Lillian Parkyn. Joe was born on July 23rd, 1930 in Lethbridge, AB and attended school at St. Basil’s Elementary and St. Patrick’s High School. He furthered his education at Campion College in Regina, SK and while there, was awarded a medal for Junior Leadership. On June 30, 1953 Joe married the love of his life, Grace Sebok and together they started their life in Lethbridge. In 1955, they moved to Barnwell where they farmed for the next 5 years. In 1960, they moved to Taber where they farmed and operated a poultry business for 45 years. They retired back to Lethbridge in 2002. Joe volunteered many hours to the betterment of his southern Alberta communities. He was a member of the Jaycees, the Lion’s Club and became very active in Jr. baseball, fastball , slow pitch and golfing. Joe was President of Minor Hockey and involved with all ages of players but always said he enjoyed the “little guys” the best. Joseph also held the position of President of the Taber Chief’s Hockey Team for 6 years and President of the Taber Figure Skating Club. Joe and Grace celebrated their 65th wedding anniversary this year and considered his greatest love to be his family, whom he treasured and adored. His kindness, support, guidance and words of wisdom is a gift that his family will carry forever. A Prayer Service will be held at CORNERSTONE FUNERAL HOME, 2800 Mayor Magrath Drive South, Lethbridge, AB on Monday, August 27th, 2018 at 7:00 P.M. A Funeral Mass will be celebrated at OUR LADY OF THE ASSUMPTION CATHOLIC CHURCH, 2405-12th Ave. South, Lethbridge, AB on Tuesday, August 28th, 2018 at 11:00 A.M. with Father Kevin Tumback celebrating. An Interment will follow at Mountain View Cemetery. In memory of Joe, donations may be made to The Lung Association, P.O. Box 4500, Stn. South, Edmonton, AB T6E 6K2