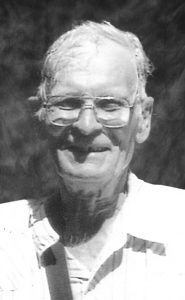 Percy was born August 18, 1936 in Fort Macleod, the second of five children born to Dorothy Vida (Bright) Evans and Joseph Harrington Evans. He attended school at McBride Lake and Fort Macleod. In 1967, Percy took over the family farm where he lived until December 2017.

In 2015, Percy received the Alberta Century Farm and Ranch Award for 100 years of Family Ranching from 1915 to 2015 (Joseph and Percy Evans of McBride Lake Angus).

Ranching and farming was Percy’s life passion, as he was no stranger to hard work and was skilled in all aspects of this lifestyle. Welding, leather and woodwork were some of his hobbies. Percy was an avid reader, excellent marksman and enjoyed a challenge. He was always quick to lend a helping hand to neighbours with chores, machinery repairs or advice over a cup of tea when necessary. His favourite time of year was calving season followed by harvesting the crops and his large garden.