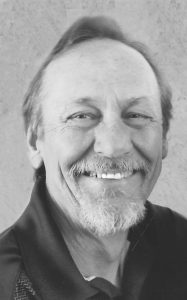 Mr. Michael Weiss of Coalhurst, beloved husband of Mrs. Cathy Weiss, passed away at the Chinook Regional Hospital on Sunday, August 26, 2018 at the age of 65 years.

Mike resided in Coalhurst. He was the third son born to Emil and Holena Weiss. Besides his loving wife, Cathy, he is survived by his children: Jamie, Angela, and Daniel; grandchildren: Mack, Greyem, Cameron, and Sana; and great grandchild, Tanya.

Mike was predeceased by his parents: Emil and Holena Weiss.

Mike was a multi-talented artist. First and foremost, he was an excellent painter, specializing in water colour. He played various instruments, including guitar, violin, harmonica, and ukulele; and hoped to master the piano one day. He loved to golf and fish with anyone who would go, but mostly with his son, Jamie and best friends: Lorne or Darrell.