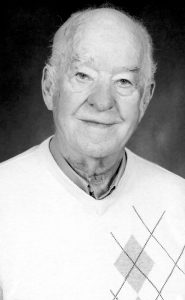 Jack Malchow passed away at the South Health Campus Hospital in Calgary on Wednesday, September 5, 2018 at age 87. Born and raised in Stavely, Alberta, Jack married Irene McAllister in 1951 and they began raising their family in Lethbridge, Alberta. In 1963 the family moved to Rossland, B.C. and eventually bought Wises Hardware Store. It was there Jack would develop his hobby of buying and selling fire arms, which grew over the next 50 years. In 2004 Irene passed away and Jack returned to Stavely, where he continued his hobby and attended weekend Gun Shows across western Canada. “Jack of Many Guns” true enjoyment was the people and the friendships which developed thru the 50 years. Jack is survived by his daughter Pam and grandchildren Paige (Todd) and Quinn (Tara) and great-grandson Mason; son Dennis (Margaret) and grandchildren Ali and Jack; as well as 4 sisters: Eleanor, Doreen, Wilda and Gloria. Jack suffered a stroke in 2017 and struggled for the next year to recover. The family would like to thank A.H.S. along with staff at Calgary, High River and Claresholm for the care and attention always given to Jack. A Memorial Service will be held at the Stavely Community Hall (5101-52 Street, Stavely) on Thursday, September 20, 2018 at 1:00 PM. In lieu of flowers, donations in Jack’s memory may be made to the High River District Health Care Foundation (donation to Unit 300), 560-9th Avenue SW, High River, Alberta T1V 1B3. Arrangements entrusted to Willow Creek Funeral Home, Claresholm. Tel: 403-625-3212. Condolences may be forwarded to the family at