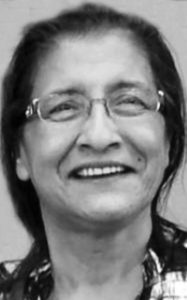 It is with great sadness we announce the passing of our dear sweet wife, mother, grandmother, great grandmother, sister and auntie MARILYN (Ma’toomsaokaasis/Pokitsowaaki) MOSES/WEASEL HEAD/WELLS at the age of 62, who left peacefully in the early morning hours of September 13, 2018 surrounded by her loving family, friends and nursing staff at the Lethbridge Regional Hospital.

Left to mourn her passing: The love of her life husband Charlie Moses

Marilyn (Ma’toomsaokaasis), was born March 16, 1956 in Cardston AB. She was raised on the Blood reserve spending her younger years in the farm four area with her siblings and numerous cousins from the Plume, Day Rider and Weasel Head families, where she shared with her children many humorous stories about growing up in farm four. She would always express how much she enjoyed living in farm four and would have loved to move back there. She lost her dad Pat Weasel Head Jr. at a young age and helped her mother with her younger siblings Tyrone, Randa, Puncho. Marilyn attended St. Mary’s residential school and then St. Mary’s day school. Her dislike of attending residential school would often lead her to “make a run for it” with her cousin/brother Godfrey W.H. and they would make their way through the bull horn area to home, that is where they received the nickname “The Runaways”. The bond she shared with her brothers Raymond and Edmond was special, the family eventually started calling them “The Triplets”. Marilyn was an avid athlete and a champion fancy dancer. She excelled in basketball, track and field and fastball in her teenage and part of her early adult years. Her mother Annie eventually packed them up and moved to Standoff and that is where Marilyn made her home. She travelled with her mother, Siblings, aunts and uncles to handgames around part of Canada and the US, that’s when she developed the love of playing handgames. Her accomplishments included attending life skills and she had various jobs which included, Blood Tribe recreation, special ed assistant with Standoff elementary school, Cashier with Standoff Superette, Spiritual advisor with St. Paul’s treatment centre, KBE PAC member and Social Development/Life Skills spiritual advisor. Proudest moments and accomplishments were when she became a mother. She met the love of her life in 1979 Charlie Moses and together they raised Wade, Jolie, Lydia, Sherri and Sheila. Her family was everything to her. Taking care of her children and raising them were the most important to her. She taught them her traditional ways of life because she was a strong believer in our ways. Her and her brother Fred, her sister Loretta joined the “Ninamsskaiiks” and were one of the youngest groups to join. She joined the Motokii Society and was a part of them for 16 yrs. In 2011, she lost her mother Annie Plume/W.H. and she took on the role of a mother and grandmother to her siblings, nieces and nephews. In her pastime Marilyn loved travelling to pow wow’s, playing bingo, casino. She loved barbeques and family gatherings. Her favorite though was handgames. This is where she met the love of her life Charlie Moses. When she became a grandparent, she was so happy and was very proud and loved everyone of her grand children. Marilyn became a great grandma in March 2017 to our dear sweet Ophelia and developed a special bond. Everytime Ophelia would visit with her, she would want to push grandma around on her wheel chair. Everyone knew they can turn to Marilyn for advice and prayers. She had a simple lifestyle and enjoyed visiting with her many family and friends especially Gloria Ann and Bella. Marilyn had a special kind of heart, love and showed compassion to everyone she knew. She will leave a void in everyone’s heart that she knew.

Condolences may be sent to:www.legacyfuneralhome.ca