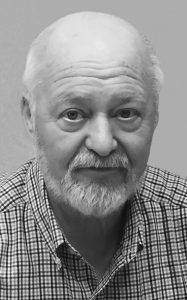 Jesus Isidro Lagunas of Lethbridge, beloved husband of Ana Maria Lagunas passed away at St. Michael’s Health Centre on Tuesday, September 18, 2018 at the age of 74 years.

Jesus was born to Esteban & Encarnacion Lagunas on May 15, 1944 in Madrid, Spain. He spent his childhood in Spain, receiving much of his education there. He married Ana Ramirez in 1969 and together they had three children. In 1979 Jesus came to Canada to visit, deciding very shortly after to immigrate in 1980, settling in Elkford B.C. He began working at Fording River Operations as a Master Electrician in 1980 and remained there until his retirement in 2006. In 2005 Jesus and Ana moved to Lethbridge and Jesus filled his days puttering around the garden, playing chess, adding to his stamp collection or just simply spending time with his grandchildren. It was often thought that Jesus was the “eighth” grandchild. He loved travelling, especially his trips back home to Spain, his last trip was in 2017. He was a proud member & past treasurer of the United Steel Workers Union Local 7884, being a strong member for his entire career. He was also a member of the Knights of Columbus.

Jesus was predeceased by his father Esteban, mother Encarnacion, and his three brothers, Esteban, Juan and Antonio.

A Funeral Mass will be celebrated at 10:30AM on Friday, September 21, 2018 at ST. MARTHA’S CATHOLIC CHURCH, 355 Columbia Blvd. West, Lethbridge, Alberta, with Father William Monis, celebrant. Cremation to follow the service.

For those who wish, memorial donations may be made to the Jack Ady Cancer Centre, 960 19th Street South, Lethbridge, Alberta T1J 1W5.