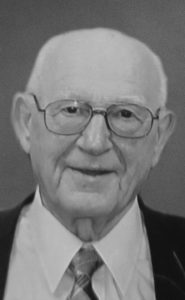 HEWKO
WALTER HEWKO, beloved husband of Isabel Hewko, of Lethbridge, passed away peacefully at St. Therese Villa, on Sunday, September 23, 2018 at the age of 85 years.
Besides his loving wife, Isabel, Walter is survived by his children, Jim (Carolyn), Debbie (Don) and Phil (Diane); six grandchildren and five great-grandchildren; his brother Paul, sister Sonia and numerous nieces and nephews.
Walter was born in Sarrail, AB, on December 26, 1932. He was the first to graduate from high school in his family and continued his education to complete a degree in business administration while working at the provincial courthouse in Edmonton. He enjoyed his work first as a bailiff and clerk of the court, then as sheriff for the Province of Alberta in Grande Prairie, AB, and Lethbridge, AB. One of his achievements was to oversee the building of the Lethbridge Courthouse which was completed in 1983. He ended his career with the province as the District Court Administrator for Southern Alberta. When he was not working and in his retirement, Walter enjoyed curling, golfing, playing cards, telling stories and getting together with family and friends.
A special thank you to the staff at the Chinook Regional Hospital 5A and St. Therese Villa for their kindness and care.
A Private Family Service will be held at a later date.
In lieu of flowers, donations may be made to the Alzheimer Society, #40, 1202 – 2 Avenue South, Lethbridge, AB, T1J 0E3.
To send a condolence, please visit
www.cornerstonefuneralhome.com