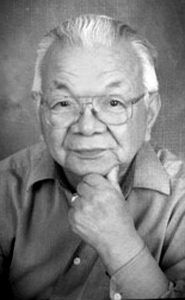 Tsuyoshi “Eddy” Nishida of Raymond, Alberta passed away in Raymond on August 26, 2018 at the age of 95 years. Eddy was predeceased by his wife Janet (Hayashi); his parents Tatsuzo and Sumiye; brothers Takeshi and Walter; sisters-in-law Flora and Miyo Nishida; and brothers-in-law George Kadonaga, Leslie Nelson and Ken Kamitomo; godson/nephew Tim Nishida; nieces and nephews, Julianne Kozak, Carol Nishida, Orville Dahl, and Gary McPherson. He is survived by his sisters Marian Nelson and Katie Kamitomo as well as many nieces, nephews, grand-nieces and grand-nephews. Eddy was born on January 1, 1923 in Woodfibre, BC. At the age of 14, he developed tuberculosis and shortly after that, his family was forced to leave the West Coast during the internment of the Japanese-Canadians during the Second World War. Eddy was separated from his family and sent to a tuberculosis sanitorium in New Denver, BC where he would live for the next 8 years. After his release in 1950, he took welding courses from SAIT. In 1952, he married Janet Hayashi in New Denver, BC, however, his beloved Janet died after only 5 years of marriage. Eddy had a passion for photography and fly fishing, but his true passion was a life of service to the church. He was an active member of St. Augustine’s Anglican Church in Lethbridge since 1951, singing in the choir for over 55 years. Licensed as a Lay Reader in 1965, he presided over countless services in churches, private homes and seniors’ nursing facilities and provided some of his services in Japanese. He was once told that he was the only Japanese Anglican Lay Reader in Canada. Eddy volunteered countless hours at the Sorrento Lay Training Centre in Sorrento, BC providing photography services and audio recordings of sessions held at the Centre over a 40-year span. He would spend his summers at Sorrento Centre and became a well-known fixture there and rains deeply respected and loved. In 2008, Eddy was awarded the prestigious “Anglican Award of Merit” for all his dedication and hours of ministry to the church. At Eddy’s request, a family service (including church family) will be held at 11:00 AM on Saturday October 6, 2018 at ST. AUGUSTINE’S ANGLICAN CHURCH, 411-11 Street South, Lethbridge, Alberta. Donations of flowers, food and monetary gifts are gratefully declined. If you wish, please donate to a charity of your choice.