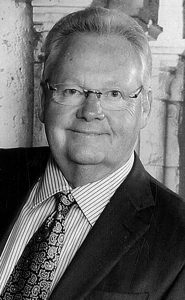 It is with heavy hearts that the family of Richard “Dick” James Martin sadly announce the passing of a loving husband, father, grandfather and brother on Monday, October 1, 2018 at the age of 72 years. Richard will be forever remembered by his loving wife Moyra; their children Jeffrey Todd and Gregory David (Laural-Lee); and his adored grandchildren Ryan, Addison, Ethan and Noah. He also leaves to mourn his sisters Muriel Williams and Dalyce (Jim) Thacker and their families. He was predeceased by his sons Trevor Ashley Martin and Robert James Martin.Richard spent thirty years in the telecommunications sector as a Managing Director with AGT/TELUS. He was committed to the spirit of giving back to his community through his active volunteerism in the Canadian Progress Club, Calgary Stampede and Rope Square and his leadership role in the Pulmonary Fibrosis Society of Calgary. Richard was a proud, Southern Alberta conservative who loved his land and lived for his family. He savored a barbequed steak, a glass of fine wine, and a good ’ole country two-step. He was a man who enjoyed shopping – a new suit, a new pair of cowboy boots, a bargain! He was a consummate host and a fine conversationalist known for his quick-witted comebacks. Family gatherings reminiscing and laughing about stories of our past were something Richard treasured. Some of his happiest times were spent with his grandchildren and planning his and Moyra’s next adventure. We will remember a life lived with purpose and principle, courage and determination who embraced fairness, loyalty and unconditional love for family and friends.

“Say not in grief he is no more but live in thankfulness that he was.”

One Condolence for “MARTIN, Richard”