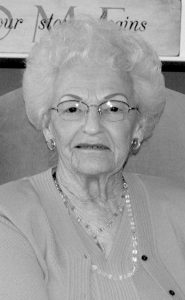 Molly Jeanine Johnson McBride, age 89, passed away peacefully on Saturday, September 22, 2018, at Raymond, Alberta. She was born February 1, 1929 in Barnwell to Miles “Jack” and Bessie (Thomas) Johnson. She attended the University of Calgary and became a teacher, working in Thelma, Raymond and Barnwell before marrying Lawrence “Keith” McBride in July 1949. Keith and Molly lived in Sherwood Park from 1955 to 1988 during which time Molly taught at the first School. She was active in the new community and did much to support its growth. After retiring to High River and Keith’s passing in 1993, Molly moved to Barnwell. Molly was a very hard worker. While raising her family she operated the only Kindergarten in Sherwood Park for over 20 years. She prided herself on being an excellent homemaker and cook, as well as a committed member of The Church of Jesus Christ of Latter-day Saints (including callings as a Stake and Ward Relief Society President, Board Member, Counselor and Teacher). Molly had an abiding testimony of the restored gospel and knew that Jesus Christ was her Savior. She was a support for Keith, who held many leadership positions in his employment and in the church. While in Barnwell she and her sister, Nadiene Nielson, became award winning quilters – giving many of their beautiful creations away to help others. Molly had a very compassionate heart and was a friend to all who knew her. She is survived by brothers Grant and Preston (Maureen) Johnson; sister Betty (Ralph) Sabey, sisters-in-law Arta and Virginia Johnson; children Lynda (David) Pearson, Terry (Mike) Jones, Coreen McBride, Colleen (Doug) Keeler, Ross (Nikole) McBride and 22 grandchildren, 19 Great Grandchildren, many nephews and nieces. Family, friends and others whose lives Molly touched are invited to attend her funeral on Saturday, September 29, 2018 at 2:00 pm at The Church of Jesus Christ of Latter-day Saints, MAGRATH STAKE CENTRE (21 E 1st Avenue S, Magrath, Alberta). Friends may meet the family between 1:00 and 1:45 pm prior to the funeral service.