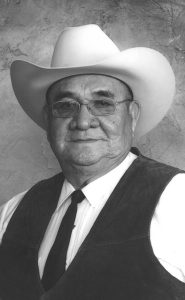 WINSTON VICTOR DAY CHIEF “Ksistsikominaa” (Thunder Chief) patriarch of the All Black Faces clan, passed away peacefully surrounded by his cherished & loving wife Martha Day Chief and his children and grandchildren of the Blood Reserve, at the Chinook Regional Hospital, on Friday, September 28, 2018 at the age of 79 years.

Winston’s passing has left a huge void for not only his immediate family but also the Bloodtribe, as they lost one of its most respected traditional elders.

Foremost he was a husband, a father, a grandfather and great grandfather.

Winston was born on the Blood Reserve to Victor and Lucy Day Chief. As the eldest child, he was nurtured by his grandmother (Minnie) and Iron. Raised in the traditional way, as a miineepooka. In his youth, he attended the St. Mary’s Indian Residential School. His real schooling was left to his father and uncles. They instilled in him a hard work ethic, humility and the ability to laugh at oneself. All of this can be seen in his own children today, whom he passed it on to.

Winston was blessed with two passions, his singing ability and horsemanship. He was one of the original members of Old Agency drum group. His singing voice was recognized throughout Alberta and western United States. He brought back many honours to the Blood Tribe. His ability with horse’s was unmatched, whether it was training for match racing, rope horses, wagon team horses, or just riding horse. His love for the horse and it’s welfare was always foremost to him.

Winston was involved in many organizations on the Blood Tribe. From fundraising for the construction of the Old Agency Hall to serving on the Blood Tribe Council. No task was to small or to big. If he gave you his word, it would be done. That was very important to him.

His lively passion was to support his children, grandchildren and great-grandchildren in their sporting activities. They all made him very proud.

In 1971, he, along with mom would start a new chapter in their lives, as members of the newly formed Magpie Society. This group of 70 plus members would be entrusted with the most of sacred tasks. Carrying on Niitsipaitapiisinnii. The Horn society-Iitskiinaiks.

For 18 years, he was a active member, then another 17 years as an drummer and an elder. As a member of the society and elder, he often serenaded the whole Sundance camp for over 60 years.

His other passion was stickgaming. From attending local jackpots to huge tournaments. He won his share. You always knew he would be there as he was often asked to say the opening blessing at these events. The past few years, it wasn’t about winning anymore, it was to visit with his Handgame family and reacquaint with old friends.

From establishing a riding program for the youth with Ervin Shade and Charlie Fox-Aayaaksima. He performed naming ceremonies for grandchildren and headdress transfers for family members, with a highlight being the headdress transfer to Premier Ralph Klein. His immense knowledge of the Blackfoot culture, its language, the songs and its traditions will be missed by all. Some people leave us with short stories but he was a novel.

He was asked once, what is our culture

“You see me pray and smudge the sweetgrass every day those who ask and for those who don’t ask. You heard me sing in the sweats and in the ceremony. You heard me sing for those that want to dance. I’ve taught u my language I showed you how to laugh. I showed you how to be a family, how to love it and protect it. That is our way our culture and you won’t find it in any book”.

The family apologizes for those names they may have missed.