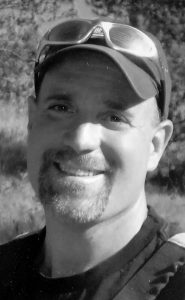 Patrick (Pat) Jay Adams, loving husband to Susie, father to Olivia and Jack, and loyal friend to many, passed away peacefully on Wednesday, October 3 at the age of 52 years after a courageous fight against a rare form of cancer. Susie was there to hold his hand and comfort him as he said farewell. He passed nine days before their 20th wedding anniversary.

Pat was born on August 17, 1966 in Olean, New York, the fourth child of Art and Anne Adams. When he was nine years old, the family moved to Canada and settled in Lethbridge. Pat grew up in a loving household that encouraged hard work, commitment, loyalty, and a desire to contribute to the community. He shared a passion for sports with his two brothers, Dave and Shawn, and he played hockey and football throughout elementary and junior high school. In high school, Pat pursued his true passion, basketball, and he followed his older brothers’ footsteps as a proud member of the LCI Rams varsity basketball team. Pat, who went by the family nickname Bubs, loved his time in high school and the lifelong friends he made. In grade 12, he was elected class President and served his school with pride. After high school, Pat’s basketball skills led him to Lethbridge College where he was a member of the Kodiaks Men’s basketball team for two seasons. Soon after graduating from the Communication Arts program in 1988, Pat returned to the United States. He worked at Microsoft in Seattle as a technical writer and at the same time gained more education at the University of Washington. He eventually completed an MBA and several writing designations. Pat’s career as a technical writer led him to Silicon Valley and eventually to Napa Valley in California. During this period, he combined his love of travel and scuba diving, and he went on many diving adventures to exotic locations around the world. Pat and Susie were married in Napa Valley in 1998. They became parents in 2001 when Olivia was born; in 2004, Jack followed, and this happy event coincided with the family relocating to Hayden, Idaho to be closer to Pat’s parents. The family quickly settled into the rhythm of a close-knit community and developed many lifelong friendships. Pat and his dad, known to many as Chief, volunteered in the community and managed several successful business ventures. Together, father and son built the family cabin in northern Idaho, known as Valhalla. Pat’s athletic pursuits shifted to mountain biking and eventually to triathlons. He completed local Ironman events, often competing alongside his brother Dave and niece Brittney. Nothing made Pat happier than being a husband and father. He loved Susie, Olivia, and Jack with all his heart, and he was so proud watching his kids excel in school and in life. In accordance with family tradition, in lieu of a funeral service a celebration of life will take place on Pat’s favourite holiday, July 4, in 2019 at a venue in Coeur d’Alene. A celebration will also be held in Lethbridge. Details for both events will follow in the coming months. Pat is survived by Susie, Olivia, Jack; sister Adena Ray, brothers Dave (Pam) and Shawn (Barb), several nieces and nephews, and countless friends. Pat’s favourite film was It’s a Wonderful Life, the story of a man who loved his family and invested deeply in building a community. Like George Bailey, Pat was grateful for all the blessings he received in his full and happy life. He did his best to lasso the moon for his beloved Susie, and now he looks on from above, waiting to earn his wings. He will be loved and missed forever.

One Condolence for “ADAMS, Patrick”